Sonos is set to release a smaller, more affordable subwoofer that will be able to wirelessly pair with the Sonos Ray and the rest of its existing soundbar lineup, a new report has confirmed. 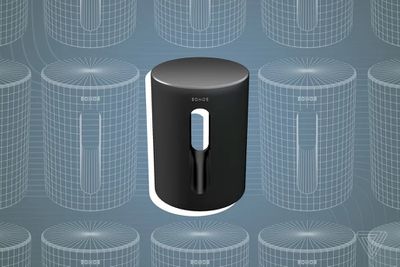 According to The Verge, Sonos is working on a smaller version of its $749 Sub, called the Sub Mini, which will be capable of pairing with the company's second-generation Beam, the Arc, and the Ray, which was unveiled earlier this month.

In an earlier leak, Sonos described the Sub Mini as a "smaller, cylindrical subwoofer," and that is pretty much reflected in a rendered version of the actual product seen by The Verge.

The main thing that distinguishes the Sub Mini hardware is an elongated, pill-shaped vertical cutout right in the middle of the device. It just so happens that the regular Sub has a rectangular cutout, so Sonos seems to have settled on this both for functionality and as a design trait of sorts. In the case of the Sub, there are acoustic ports on both sides, so it would follow that the Sub Mini will have a similar internal layout — albeit with smaller, less powerful components.

The full features list, dimensions, price, and release date have not been disclosed, but the subwoofer is likely to follow the same design signature as other recent and upcoming products in its home theater lineup.

Apart from the Ray soundbar, Sonos also announced this month that it will be launching its own voice control system for its speakers, allowing users to say "Hey Sonos" to control compatible music services, including Apple Music, Amazon Music, Deezer, Pandora, and Sonos Radio.

That's pretty much what Sonos did, and there was no way to undo it after people unknowingly installed the "software update".

ggibson913
I would be interested if it supported the first Gen Beam. I am not sure I want to purchase a whole new setup for the bedroom
Score: 6 Votes (Like | Disagree)

I bought a sonos beam gen 2 with two Sonos SL speakers during Black Friday a couple of years ago for $550 all together from Best Buy. Every time I have guest over they always complement the sound. All tech is heading in the direction of equipment becoming obsolete. Apple does it all the time without much though from others.

Actually, after a lot of complaints, they didn't "brick" the obsolete line. You create a separate "zone" for older speakers and they work just fine. Though wired speakers fare better over time- I have a set of Energy speakers from the early 90s that still sound amazing with a Denon receiver. I can connect all of that to my Sonos setup with the Sonos Port.
Score: 4 Votes (Like | Disagree)

If Apple is going to release a sound bar or a new full size HomePod in June, now would be a good time to leak it.

I hope they don't underestimate the impact a lower priced sub will have on Sonos sales.

While I’m somewhat biased as have quiet a lot of Sonos gear including the Arc and Sub, I can see a cheaper sub being popular. Given how Apple handled the original HomePod I‘m not sure if I’d be tempted to go for an Apple sound bar as you’ll never know if Apple just decides to drop it and do something else.

Then again Sonos aren’t immune from doing stupid things, such as bricking series 1 speakers if you decided to use them to get a discount on series 2. Thankfully they no longer do this though you do miss some features in a mixed series 1 and 2 system (can’t remember exactly what as now entirely series 2).
Score: 4 Votes (Like | Disagree)

There's no bloody way I should have to give a speaker my exact location and access to see everything on my network.

1) You don't have to give location access.
2) The app needs to communicate with speakers on a network. That's the basis of how the speakers function.
Score: 4 Votes (Like | Disagree)

Nothing wrong with looking like a round file. Round files are incredibly useful devices for avoiding record management systems.
Score: 3 Votes (Like | Disagree)
Read All Comments