Sonos today unveiled its lowest-priced soundbar, the Sonos Ray. Priced at $279 in the U.S., the compact soundbar is said to utilize "advanced processing" to create a "surprisingly wide soundstage," and AirPlay 2 support allows for audio to be wirelessly streamed to the soundbar from Apple devices like the iPhone, iPad, and Mac. 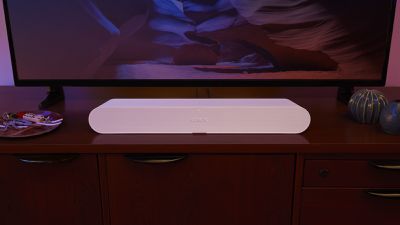 The complete Sonos soundbar lineup now consists of the Ray for $279, the second-generation Beam for $449, and the Arc for $899.

Sonos also announced that it will be launching its own voice control system for its speakers, allowing users to say "Hey Sonos" to control compatible music services, including Apple Music, Amazon Music, Deezer, Pandora, and Sonos Radio.

Sonos speakers already support Amazon Alexa and Google Assistant, and now users will have access to Sonos voice control as a third option.

Sonos said the voice control feature will be available in the U.S. starting June 1, and in France later this year, with additional markets to follow. The company ensures that all "Hey Sonos" voice requests will be processed entirely on device, with no audio or transcripts sent to the cloud, listened to, or read by any party.

Am I the only one that doesn't want every speaker in my house acting as an assistant? Seems redundant, isn't that what my iPhone is for? I also doubt Sonos has the skill or money required to implement an assistant.

I know this is not the point you are making, but Sonos is unique as they are one of the few companies that specifically sell models without microphones. They are branded SL and typically are $20-$30 cheaper. They understand they're are people who don't want it and don't just want a mute option.
Score: 15 Votes (Like | Disagree)

JoEw
Crazy to me that a soundbar doesn’t have HDMI-CEC/ARC. What an odd omission presumably to get folks to jump up to the next price ladder the $450 Beam.
Score: 10 Votes (Like | Disagree)

icanhazmac
Am I the only one that doesn't want every speaker in my house acting as an assistant? Seems redundant, isn't that what my iPhone is for? I also doubt Sonos has the skill or money required to implement an assistant.
Score: 10 Votes (Like | Disagree)

does it work as a computer speaker (wired)

Yes but only optical audio. This soundbar lacks HDMI and analog audio input.

Older Mac's headphones jack can output optical audio, but that ability has been eliminated on Macs made from mid-2015 and on.

You can of course get a dongle, but that can contribute to a bit of latency.
Score: 5 Votes (Like | Disagree)

SSDGUY
To better differentiate from Siri and Alexa they should change it to "Whaddup Sonos!"
Score: 4 Votes (Like | Disagree)

SONOS needs to implement SIRI SUPPORT!!! It's beyond time and I have the Arc and Sub...

The problem is how Apple implements Siri on third-party devices.
Score: 4 Votes (Like | Disagree)
Read All Comments