Today marks the 20th anniversary of Apple introducing the eMac, designed specifically for educational use in classrooms and computer labs. 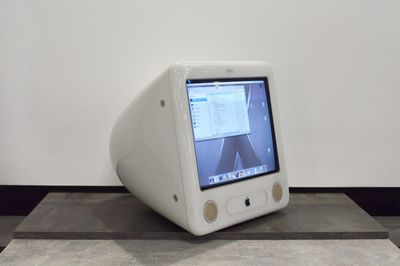 eMac via Hellenic IT Museum
Priced at $999 in the United States, the original eMac featured a white enclosure with a 17-inch flat-faced CRT display, a 700 MHz PowerPC G4 processor, 128 MB of RAM, a 40 GB hard drive, five USB ports, two FireWire ports, two speakers, and a built-in CD-ROM drive. An upgraded model with a faster 56K internet modem was available for $1,199.

"Our education customers asked us to design a desktop computer specifically for them," said Steve Jobs, in April 2002. "The new eMac features a 17-inch flat CRT and a powerful G4 processor, while preserving the all-in-one compact enclosure that educators love."


The original eMac shipped with Mac OS X version 10.1.4, known as "Puma," and it came preinstalled with Microsoft's Internet Explorer. Apple's own web browser Safari was announced in early 2003, months after the eMac launched.

Citing strong consumer demand, Apple made the eMac available to all customers in June 2002.

"Consumers have pounded on the table demanding to buy the eMac, and we agree," said Jobs. "The eMac's production ramp is ahead of schedule, so we'll have enough eMacs this quarter to satisfy both our education and non-education customers."

Apple went on to release additional eMac configurations with upgraded specs and a SuperDrive. In October 2005, the eMac became limited to educational institutions only again, and the eMac was replaced by a low-end 17-inch iMac in July 2006.

sunapple
I had the 1.42Ghz model in 2009, my first Mac. Couldn’t play a YouTube video but I was proud nonetheless.

gmanist1000
I remember removing 60 of those things from computer labs... what a workout that was... they are heavier than they look.
Score: 22 Votes (Like | Disagree)

bluespark
This was a great computer and great deal in its time. I wish Apple took the K-12 education space as seriously now as it did then. Chromebooks are the computes of choice in that space, and its one that Apple easily could have owned.
Score: 17 Votes (Like | Disagree)

Slippery Gimp
My first Mac (and my first new computer ever), albeit I bought mine in 2004 as well as a 3rd Gen iPod. Great upgrade from my minidisc!
Score: 14 Votes (Like | Disagree)

MacLawyer
We had one of these. A very overlooked Mac. Lots of homework was done on this, plus lots of time playing games. The only drawback: thing weighed a ton.
Score: 13 Votes (Like | Disagree)

Aaron44126
I worked for a school when these were new. We had a lot of them. I liked the design, but I remember that they were very obnoxious to carry around! They don't have a handle like the iMacs did. They're pretty heavy. The chassis is made of slick plastic, so not only is there no good place to grip, but your grip is constantly in jeopardy because it's a bit slippery. So, when I think of the eMac, I just remember being annoyed at having to carry 30 or so of them between buildings on campus which happened a few times.
Score: 10 Votes (Like | Disagree)
Read All Comments

Friday May 6, 2022 9:35 am PDT by Juli Clover
Yet another rare Apple-1 computer is up for auction, and this one already has a bid of over $250,000. The Apple-1 was the first Apple product created by Steve Jobs and Steve Wozniak when Apple Computer was founded, and there are few left in existence. Apple-1 models that come up for auction often fetch high prices because of their rarity, and this particular Apple-1 up for sale is number 7...
Read Full Article • 50 comments

Wednesday May 4, 2022 10:18 am PDT by Juli Clover
T-Mobile today announced the launch of a new internet "Test Drive" program that's designed to allow users to try out 5G T-Mobile internet in their homes. T-Mobile will send users a gateway to try out for a 15 day period at no cost, with users able to keep their existing internet during the testing program. To encourage customers to switch to T-Mobile Home Internet, T-Mobile is paying up to...
Read Full Article • 104 comments

Tuesday May 3, 2022 4:45 am PDT by Tim Hardwick
Microsoft Edge has overtaken Apple's Safari to become the world's second most popular desktop browser, based on data provided by web analytics service StatCounter. According to the data, Microsoft Edge is now used on 10.07 percent of desktop computers worldwide, 0.46 percent ahead of Safari, which stands at 9.61 percent. Google Chrome remains in first place with a dominant 66.64 percent...
Read Full Article • 149 comments

Monday May 9, 2022 2:15 am PDT by Tim Hardwick
Apple supplier Quanta's ability to manufacture MacBook Pro models at its Shanghai site remains seriously hampered despite the easing of lockdowns and resumption of production, reports DigiTimes. According to the Taiwan-based supply chain website, Quanta has so far only been able to restore around 30% production capacity at its Shanghai site since lockdowns ended last month. Quanta is the...
Read Full Article • 95 comments