Alongside betas of iOS 15.5, iPadOS 15.5, and macOS Monterey 12.4, Apple today released a beta version of new 15.5 firmware designed for the Studio Display. 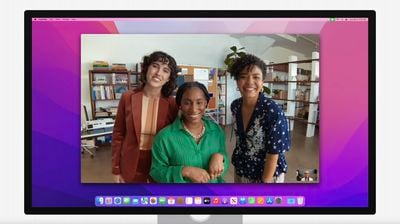 Apple in March promised a firmware fix for the Studio Display to address an issue with the webcam, and according to an Apple spokesperson that spoke to The Verge, the firmware beta released today does indeed fix the webcam problem.

The Studio Display is equipped with a 12-megapixel Ultra Wide camera that supports Center Stage, but Studio Display reviewers and owners have discovered that the camera consistently produces grainy, washed-out images, which Apple has said is the result of an issue causing the system to not behave as expected. The firmware brings updated "camera tuning, improved noise reduction, contrast, and framing."

All Studio Display models are able to receive over-the-air firmware updates, but this firmware update is limited to Macs that are running the ‌macOS Monterey‌ 12.4 beta at the current time. After installing the macOS 12.4 beta, Studio Display owners can go to System Preferences > Software Update to install the firmware.

So? If you're using the display with unsupported systems, you're bound to run into problems.

This is a 100% Apple-created problem. How many displays have you seen on the market where 1) they shipped on day one with a software defect, hindering a major feature that the manufacturer touted as a selling point for that display, and then 2) were so tied to not only a specific operating system, but a specific version of said operating system, that said software defect cannot be fixed for some recent purchasers of that display, unless they buy a new computer or at the very least, upgrade their operating system?

Not too many displays on the market right now where "using with unsupported systems" is even a thing people have to worry about.

I gotta say, someone else put it very well - that $1700 monitor is looking less and less like a good value every time someone writes about their experience with it.
Score: 12 Votes (Like | Disagree)

TheYayAreaLiving ?
I'm shocked it took Apple this long. It's almost May and it's still not out yet. Better late than never, Apple.
Score: 8 Votes (Like | Disagree)

This is a 100% Apple-created problem. How many displays have you seen on the market where 1) they shipped on day one with a software defect, hindering a major feature that the manufacturer touted as a selling point for that display, and then 2) were so tied to not only a specific operating system, but a specific version of said operating system, that said software defect cannot be fixed for some recent purchasers of that display, unless they buy a new computer or at the very least, upgrade their operating system?

Agreed - it's absurd, and the people carrying water for Apple on this are just .... I don't get it.
Score: 7 Votes (Like | Disagree)

Jeven Stobs
Still it’s incredible that they messed up shipping it with a „broken“ OS at launch in the first place and needed multiple attempts at fixing several issues. Not good.
Score: 5 Votes (Like | Disagree)
Read All Comments

Tuesday May 3, 2022 10:24 am PDT by Juli Clover
Apple today released a second beta version of new 15.5 firmware that's coming to the Studio Display, with the software coming one week after the launch of the first beta. The Studio Display firmware is designed to improve the function of the webcam on the device. All Studio Display models are able to receive over-the-air firmware updates, but this firmware update is limited to Macs that are...
Read Full Article • 118 comments

Monday May 16, 2022 10:08 am PDT by Juli Clover
Apple today released a new 15.5 firmware for the Studio Display, with the update coming after a few weeks of beta testing. The Studio Display Firmware improves the performance of the webcam. The Studio Display firmware can be updated by connecting it to a Mac running macOS Monterey 12.4, which was also released today. After installing the new Mac software, Studio Display owners can go to...
Read Full Article • 133 comments

Here's What the Studio Display's Webcam Looks Like After 15.5 Beta Firmware Update

Tuesday April 26, 2022 1:45 pm PDT by Juli Clover
Apple today released new beta firmware for the Studio Display, which is available to Studio Display users who have the macOS Monterey 12.4 beta installed on their Macs. The updated firmware includes a fix for the webcam, so we thought we'd take a quick look to see the tweaks in action. Subscribe to the MacRumors YouTube channel for more videos. Prior to the launch of the Studio Display, review...
Read Full Article • 131 comments

Tuesday October 4, 2022 12:09 pm PDT by Juli Clover
Apple today released updated firmware for the MagSafe Charger that is designed to work with the iPhone 12 and later and the AirPods Pro 2. The new firmware is version 10M1821, up from the prior 10M229 firmware. Note that in the Settings app, you'll see a different version number than the firmware number, with the update displayed as version 255.0.0.0 (the prior firmware was 247.0.0.0). The...
Read Full Article • 189 comments

Thursday May 12, 2022 10:09 am PDT by Juli Clover
Apple today seeded the release candidate version of an upcoming macOS Monterey 12.4 update to developers for testing purposes, with the new update coming a week after the release of the fourth macOS Monterey 12.4 beta. Registered developers can download the beta through the Apple Developer Center and after the appropriate profile is installed, betas will be available through the Software...
Read Full Article • 50 comments

Thursday November 10, 2022 1:48 pm PST by Juli Clover
Apple today released a new firmware update designed for its AirTag item trackers, with the firmware featuring an updated build number of 2A24e, up from the 1A301 firmware that was released back in April. Apple does not provide release notes for AirTag updates, so we do not know what's new in this update. It is not possible to force an AirTag update, as it's something that's done...
Read Full Article • 91 comments

Thursday December 1, 2022 4:37 pm PST by Juli Clover
With the launch of iOS 16.1, Apple rolled out a Emergency SOS via Satellite, which is designed to allow iPhone 14 owners to contact emergency services using satellite connectivity when no cellular or WiFi connection is available. The feature was put to the test in Alaska today, when a man became stranded in a rural area. In the early hours of the morning on December 1, Alaska State Troopers ...
Read Full Article • 198 comments

Tuesday November 29, 2022 11:54 am PST by Juli Clover
An unnamed 27-year-old man who purchased 300 iPhones from Apple Fifth Avenue on Monday morning was robbed shortly after leaving the store, according to 1010Wins Radio in New York. He was carrying 300 iPhone 13s in three bags and walking to his car at 1:45 a.m. when another car pulled up next to him. Two men jumped out and demanded that he hand over the bags. Not wanting to hand over 300...
Read Full Article • 385 comments