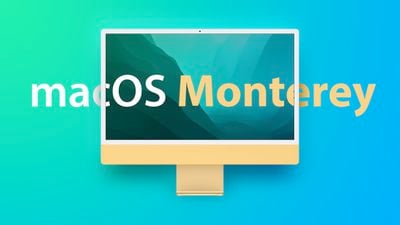 Registered developers can download the beta through the Apple Developer Center and after the appropriate profile is installed, betas will be available through the Software Update mechanism in System Preferences.

According to Apple's release notes, Universal Control in the new iPadOS 15.5 and macOS Monterey 12.4 updates is not compatible with machines running macOS 12.3 or iPadOS 15.4, so Apple suggests that as a workaround, users should update their ‌Universal Control‌ devices to the new betas.

We don't yet know if there are any other features in macOS Monterey 12.4, and nothing new was discovered in the first beta.

Another release candidate version of macOS Big Sur 11.6.6 has also been seeded.

I've sorta been convinced from other comments, more or less "theres no way apple pushed out this monitor without knowing the quality of webcam recording and that this firmware bug, just snuck up on them."

Nothing new mentioned in release notes. Same as before.

HobeSoundDarryl
Here's hoping this version fully realizes what the U in USB stands for. I miss "just works."

I'm hoping for a Snow Monterey year announcement at WWDC... maybe even 2 years of Snow if they need it.
Score: 6 Votes (Like | Disagree)

1. This issue didn't exist in 12.2 for me, so no I haven't been complaining since then, you made that up.
2. The issue is on Apple's side, not mine, they need to fix their buggy software and correct the memory leaks.

see #1 ('https://forums.macrumors.com/threads/major-memory-leak-on-12-2-m1-systemstats.2335199/post-30867127')
If that is unrelated to the existing 12.4 beta instance, my bad. But you have multiple posts mentioning it. Sometimes you need to start clean, and its why I recommended a DFU restore to reset system FW also.
Score: 4 Votes (Like | Disagree)
Read All Comments