Apple today announced that it has renewed the critically acclaimed workplace thriller "Severance" for a second season. The announcement comes just a few days ahead of the season one finale, which will be released this Friday, April 8 on Apple TV+. 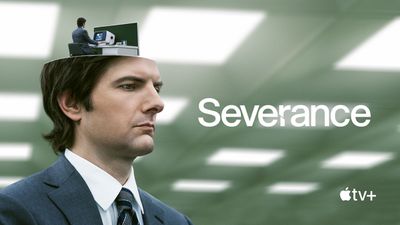 The sci-fi series, created by Dan Erickson and executive produced by Ben Stiller, revolves around a mysterious company named Lumon Industries, whose employees cannot recall any memories about their personal lives while they are at work. Likewise, once the employees leave the office, they cannot remember anything about the workplace.

Apple TV+ does not release viewing figures, but "Severance" appears to have become one of Apple's more popular series since it premiered in February. The series stars Adam Scott, Patricia Arquette, Christopher Walken, and others.

"Thanks to creator Dan Erickson, the brilliant Ben Stiller, and an incomparable cast and crew, 'Severance' has imagined an existence that's equal parts riveting and enthralling as viewers around the globe can't get enough of these rich characters," said Matt Cherniss, head of programming for Apple TV+. "We're excited to go deeper into this wholly unique world and unpack more layers of Lumon in season two."

"It's really exciting to see the response from people who are loving the show — and the level of fan engagement," said Stiller. "It has been a long road bringing 'Severance' to television. I first read Dan's pilot over five years ago. It has always been a multi-season story, and I'm really happy we get to continue it. I'm grateful to our partners at Apple TV+ who have been behind it the whole way. Praise Keir!"

chr1s60
Really enjoying this show. The way the most recent episode ended has me on edge waiting for the finale.
Score: 37 Votes (Like | Disagree)

Herrpod
Surprise, another great show on Apple TV. My 5 dollars a month is definitely rewarded. I wish I could say that about the 20+ from Netflix.
Score: 28 Votes (Like | Disagree)

gcmexico
one of the Best Apple TV+ has done, AWESOME show!
Score: 24 Votes (Like | Disagree)

Martyimac
It's riveting in a way I can't describe. I find myself watching a show that is at times very slow moving. Yet there is enough "stuff" happening that I can't look away.
Score: 21 Votes (Like | Disagree)

aevan
Severance is awesome, really glad to hear this. A surprise hit for me. My favorite Apple TV+ show and one of the best shows this year.
Score: 20 Votes (Like | Disagree)

Surprise, another great show on Apple TV. My 5 dollars a month is definitely rewarded. I wish I could say that about the 20+ from Netflix.

Netflix gets worse each year while other platforms seem to be improving.
Score: 17 Votes (Like | Disagree)
Read All Comments