Apple today released its 16th annual People and Environment in Our Supply Chain report. Previously known as the Supplier Responsibility report, the document details how Apple and its suppliers are supporting people across the company's supply chain, transitioning to clean energy, and investing in innovative technologies. 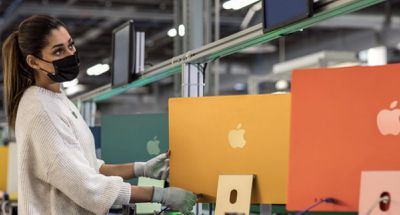 Apple also announced a new $50 million Supplier Employee Development Fund that the company said will expand access to learning opportunities and skills development for people across its supply chain. Apple said the fund also includes new and expanded partnerships with rights advocates, universities, and non-profit organizations, including the International Organization for Migration and the International Labor Organization.

Apple said the new educational programming will be initially available to supplier employees in the United States, China, India, and Vietnam. By 2023, Apple said it expects more than 100,000 supplier employees to participate in new learning opportunities, ranging from leadership training and technical certifications to classes on coding, robotics, and advanced manufacturing fundamentals, including green manufacturing.

"We put people first in everything that we do, and we're proud to announce a new commitment to accelerate our progress and provide even more opportunities for people across our supply chain," said Sarah Chandler, Apple's senior director of Environment and Supply Chain Innovation. "Together with rights advocates and education leaders, we are continuing to drive new innovation to support people and the planet."

If they put people first they would employ them rather than use loopholes to have them provide labor with none of the rights of an employee.

Their revenue per number of employees ratio is completely lopsided.

I get tired of repeating my same story as I have in other threads, but I was put to work for Apple through a disability agency in my state. I was trained by Apple—training I had to pay for. Apple paid nothing into Social Security payroll tax because they have you incorporate yourself as a corporation of one and then subcontract out to your corporation and you are an employee of yourself, despite the fact that you use their systems and work alongside all their other AppleCare employees and contractors. You are the "face" of Apple and yet have no official association with them. At the time I did this there were about 12 large corporations in the US contracted for AppleCare and Apple Sales in the US. All were pitted against each other with impossible metrics. And then those corporations had subcontractors as well. Apple did have its own internal AppleCare employees, as well, who got benefits and had employee rights. But you weren't allowed to transfer from contract status to employee status. In fact you weren't even allowed to talk to Apple. You have no labor rights. It's like you're a carpenter building a deck for someone. Except you use the homeowner's tools, the homeowner tells you how to build the deck, gives you constant feedback, and you work for the homeowner's customers, and there are thousands of you working for the homeowner. In short, it's nothing like building a deck for someone, but they use the labor laws (or lack of them) like it is. I could go on, but I've repeated this ad nauseam so many times.

It's basically Uber but worse because with Uber there is one group of people who at least know what's going on with each other. This is like if Uber secretly had 12 different companies that competed against each other providing the exact same Uber service but with different names so they didn't know they were competing with each other within the same company and each of the 12 companies had even more subcontractors and they were all pitted against each other on price, but despite being 12 different companies it was all Uber service.

I shouldn't write as I'm falling asleep, but I get tired of Apple's BS.

Instead of "investing" $50 million, pay the GD Social Security payroll tax you're avoiding on the non-employees who are doing the *exact* work of employees.

Edit:
The last time one of these reports came out, I let Apple know what I thought. And I got no response.

Their supplier feedback web-site is now a 404:
https://www.apple.com/feedback/supplierresponsibility.html
Score: 13 Votes (Like | Disagree)

That model is not an assembly worker. Where is the dark skinned worker who looks like they have been working 60 hours and is about to pass out? Apple’s sugar coating in action.

The media has you brain washed. There are some extremely attractive people working on assembly lines.

Obviously it’s not an assembly workers as she isn’t assembling a computer. This is a QA tester. As for the dark skinned thing, did Foxconn move their plant out of China suddenly?

It’s funny you mention that. All “western” factories have forced diversity. Try to find a “minority” in an “eastern“ facility.

It’s all assembled in China, and no one employed there is dark skinned.

Not everything Apple comes from China.
Score: 4 Votes (Like | Disagree)

man3ster
That model is not an assembly worker. Where is the dark skinned worker who looks like they have been working 60 hours and is about to pass out? Apple’s sugar coating in action.
Score: 4 Votes (Like | Disagree)

That model is not an assembly worker. Where is the dark skinned worker who looks like they have been working 60 hours and is about to pass out? Apple’s sugar coating in action.

It’s all assembled in China, and no one employed there is dark skinned.
Score: 3 Votes (Like | Disagree)

Thursday August 4, 2022 6:43 am PDT by Sami Fathi
Foxconn, Apple's largest supplier, is looking to further expand its presence in India with the opening of a new production facility within an existing factory in the country to produce the iPhone, The Economic Times reports. Foxconn is reportedly set to begin production in the new building in just a few months after ramping up hiring in the country in recent weeks, according to the report....
Read Full Article • 37 comments

Apple Reportedly Moving Some iPad Production From China to Vietnam

Wednesday June 1, 2022 5:04 am PDT by Hartley Charlton
Apple is shifting some iPad production from China to Vietnam for the first time, Nikkei Asia reports. Currently, the overwhelming majority of the iPad's supply chain is concentrated in China. Apple has been reported to be interested in moving at least some iPad production to Vietnam since January 2021, but supply chain issues over the past year are said to have delayed the move. Now, the...
Read Full Article • 41 comments

Global Smartphone Shipments to Decline 3.5% in 2022, Apple to Be Least Impacted

Wednesday June 1, 2022 2:55 pm PDT by Juli Clover
Global smartphone shipments are expected to decline 3.5 percent to 1.31 billion units in 2022, according to IDC's latest Worldwide Quarterly Mobile Phone Tracker forecast. Because of increasing challenges with supply and demand, IDC is significantly reducing its forecast for 2022, which previously predicted 1.6 percent growth. IDC believes Apple will be the "least impacted vendor" because of ...
Read Full Article • 46 comments

Peloton Turning to Apple Suppliers After Failing to Find a Buyer

Tuesday July 12, 2022 4:09 am PDT by Hartley Charlton
Peloton is switching to Apple suppliers like Quanta and Pegatron as it attempts to turn its business around, Bloomberg's Mark Gurman reports. Peloton will no longer produce its bikes and treadmills at its own factories and rely solely on manufacturing partners in a desperate attempt to simplify its operations and reduce costs, according to the report. Apple supplier Quanta already provided...
Read Full Article • 58 comments

Wednesday May 4, 2022 5:08 am PDT by Sami Fathi
Roughly 24 hours after saying it would ramp up hiring and incentives for new employees, Foxconn, Apple's main iPhone supplier, said today it would abruptly stop hiring new workers for its plant in Zhengzhou, China, after new COVID-19 lockdowns and restrictions were imposed on the city of nearly 11 million residents. Just yesterday, Foxconn was signaling it wanted to hire more workers to meet ...
Read Full Article • 116 comments

Monday June 13, 2022 3:59 am PDT by Tim Hardwick
Apple has reportedly added a third contract manufacturer to its MacBook supply chain that will primarily handle assembly orders for the new MacBook Air (via DigiTimes). China-based Wingtech Technology is said to have won the orders for Apple's just-announced new Mac model. The company joins Quanta Computer and Foxconn in what is now a trio of firms in Apple's MacBook supply chain....
Read Full Article • 85 comments

Friday August 5, 2022 3:00 am PDT by Tim Hardwick
Apple supplier Pegatron has denied media reports claiming shipments to and from its factories in China were being held for scrutiny by Chinese customs officials, following a Pegatron executive's meeting with U.S. House Speaker Nancy Pelosi (via DigiTimes). In a filing with the Taiwan Stock Exchange, the company indicated that iPhone production at its China-based sites is continuing as normal ...
Read Full Article • 101 comments