Apple today introduced the Mac Studio, an all-new Mac that's a hybrid between a Mac Pro and a Mac mini, with the new machine equipped with M1 Max and M1 Ultra chips. 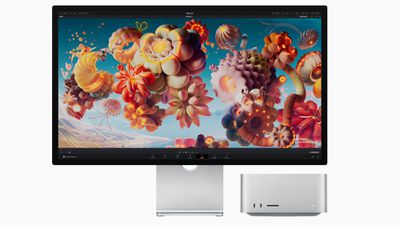 Alongside the ‌Mac Studio‌, Apple introduced the new 5K 27-inch Studio Display, which is also available to be ordered starting today. Adding nano-texture glass will cost $300, while the adjustable tilt display that Apple described is priced at $400.

Both the ‌Mac Studio‌ and the Studio Display will begin arriving to customers on Friday, March 18.

Preorders for the new iPhone SE and the new iPad Air will begin this Friday, and those products will also begin shipping on March 18.

BlendedFrog
Yep...a mac studio with the upgraded m1 max, 64gb memory, and 1tb drive for $2500. That is a huge difference between the MBP that I was going to get. So, the order for the MBP is now canceled, the mac studio is ordered and I am keeping the MBA. Not a half bad deal.
Score: 4 Votes (Like | Disagree)

qua
Hard drive prices on this are prohibitive. Can they be replaced?
Score: 3 Votes (Like | Disagree)

jeffmetanna
This is gonna be the best crypto mining machine.
Score: 2 Votes (Like | Disagree)

roland.g
So let me get this right.

That $800 delta is way in favor of the studio and makes the existing M1 Mini look like a ripoff in comparison, even if the Studio is overkill for most people's needs and desired pricing.
Score: 2 Votes (Like | Disagree)

I wonder if that's true. I'm really happy with my M1 mini and right now consider it a bargain. It crunches 4k video week after week without a hiccup. If I spend $800 more, I'd expect it to be a little faster. But unless I were to go with the Ultra version, I don't think it would be THAT much faster. So I'd rather keep the money in my pocket until the Studio has been put through its paces and reviewed.

BTW, I'm a bit confused by Apple's repeated reference to the Studio as a "modular" system. To me, that implies user-upgradable parts, which clearly can't be done with the Studio. I guess what they mean is that it's a box to which you can attach your own peripherals, like the mini.

Correct, the Apple world has been crying for a mid-range "tower" for years, never expecting to get one. Back in the day of the Mac Pro and user changeable RAM and drives, etc., way before the iMac Pro, etc., like when Core 2 Duo was a thing.

This BYO Keyboard, Mouse, and Display in something other than the "entry level" Mini is the closest thing to a powerful computer below Mac Pro territory that Apple has ever offered without a built in Display. And b/c of that it will be wildly successful. A bit pricey, but truthfully for the power, the M1 Max Studio at $2k is not a bad machine. At $1400-1700 it would sell at crazy volumes.

Best options if you are not a true professional using this as a means to a living are either waiting for an M2 Mini release before year end (along with the corresponding laptops) OR a refurb or discounted base Studio before year end as they become available at slightly better pricing. Unless you "need" it today, I wouldn't pay $2k for a base Studio.

The crappy part is that the sweet spot is a $2,200 Studio with 1TB storage. But refurbs and deals will likely be stock configs. So grab some external storage and deal with the fact that they start with 512GB. It's insulting but on par with Apple tactics to start a $2k computer with 1/2 a TB of storage in 2022.
Score: 2 Votes (Like | Disagree)

Hard drive prices on this are prohibitive. Can they be replaced?

Nothing is user replaceable I would assume
Score: 1 Votes (Like | Disagree)
Read All Comments