CalDigit today introduced its new Thunderbolt Station 4 dock with 18 ports, which it claims is the most on any Thunderbolt dock ever. 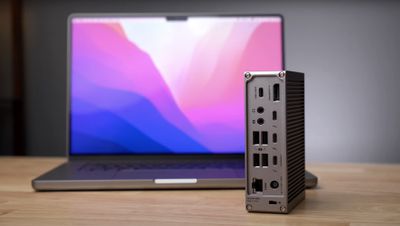 The dock features three Thunderbolt 4 ports, with one of them providing up to 98W of pass-through charging to compatible Macs, including the latest 14-inch and 16-inch MacBook Pro. The dock is also equipped with three USB-C ports (3.2 Gen 2), five USB-A ports (3.2 Gen 2), SD and microSD card slots (UHS-II), one DisplayPort 1.4 port, one 2.5 Gigabit Ethernet port, an audio in jack, an audio out jack, and a combo audio in/out jack.

The dock is also compatible with Macs and iPads featuring Thunderbolt 3 or USB-C ports, with some functionality limited depending on the device.

While the 14-inch and 16-inch MacBook Pro brought back many ports, the dock can expand connectivity even further and serve as a hub for connecting external displays, microphones, headphones, speakers, and other equipment.


Priced at $359.95 in the United States, £324.99 in the United Kingdom, and €324.99 in the EU, the dock can be ordered through CalDigit's online store in those regions starting today. CalDigit said the dock will launch in other regions in mid-March.
Tags: CalDigit, Thunderbolt 4
[ 173 comments ]

Albright
The most ports on any Thunderbolt dock ever, maybe… but still no HDMI. Can someone explain to me why the makers of these things seem to have such an aversion to it? It seems silly that I can pay so much money for one of these things but still have to use a dongle to connect any monitor I own to it. Is it a licensing issue?
Score: 17 Votes (Like | Disagree)

djeeyore25
No SCSI ports? Forget it.
Score: 13 Votes (Like | Disagree)

Adarna
No FireWire? No miniDP?
Score: 13 Votes (Like | Disagree)

MacNerd01
Is it just me, or does this dock seem a little overkill?
Score: 11 Votes (Like | Disagree)

No FireWire? No miniDP?

Friday January 28, 2022 9:16 am PST by Juli Clover
For this week's giveaway, we've teamed up with MAXOAK to offer MacRumors readers a chance to win a Bluetti portable power station. One winner will receive the 2048Wh high-end Bluetti AC200MAX and two winners will receive the 500Wh Bluetti AC50S. All of these products are great to have on hand for camping, RV use, off-grid living, power outages, emergencies, and more. The AC200MAX is one of...
Read Full Article • 48 comments

Thursday February 3, 2022 8:30 am PST by Mitchel Broussard
MacRumors and Brydge have partnered up this week with a sale that is taking 20 percent off a selection of Brydge's best iPad-compatible keyboards, as well as the retailer's MacBook Vertical Dock. This sale is for United States residents only and will run through February 17. You'll need to use the code MACRUMORS20 to see the discounts. Note: MacRumors is an affiliate partner with some of these ...
Read Full Article • 18 comments

Tuesday October 12, 2021 8:03 am PDT by Joe Rossignol
Hyper today announced the release of ">two new HyperDrive hubs that allow M1 models of the MacBook Air and 13-inch MacBook Pro to connect to two 4K displays over HDMI in a plug-and-play manner with no drivers required. There is a 3-in-1 version of the hub with two HDMI ports and a USB-C Power Delivery port for up to 100W of pass-through charging, and a 10-in-1 version of the hub that offers...
Read Full Article • 24 comments

Monday November 1, 2021 12:18 pm PDT by Juli Clover
Apple seems to have no plans to replace the iPhone's Lightning port with a USB-C port to bring it in line with Macs and iPads, but robotics student Ken Pillonel spent months hacking an iPhone to add a USB-C port. In early October, Pillonel shared a video demonstrating the "world's first iPhone with a USB Type-C port," and now he's shared a second video explaining how he pulled it off....
Read Full Article • 170 comments

Friday December 2, 2022 10:54 am PST by Juli Clover
Google is continuing on with its attempt to convince Apple to adopt the RCS messaging standard, publishing a new "it's time for RCS" blog post. Promoted heavily by Google, RCS or Rich Communication Services is a messaging standard that is designed to replace the current SMS messaging standard. It provides support for higher resolution photos and videos, audio messages, and bigger file sizes, ...
Read Full Article • 682 comments