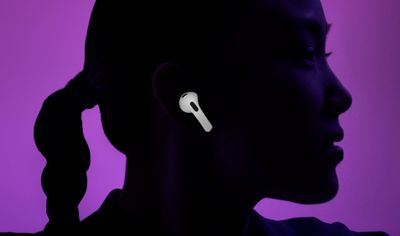 In a patent application titled "User Identification Using Headphones," filed with the United States Patent and Trademark Office and spotted by Patently Apple, Apple explains how it can authenticate AirPods users using other nearby devices, ultrasonic signals, voice recognition, and even a wearer's gait.

The filing seeks to address the issue of AirPods being unable to determine whether a wearer is the authorized user of a connected device. Apple suggests that this can be a problem since any user can place headphones into their ear while they are connected to a device belonging to another person, which risks the connected device releasing personal information, such as via notifications announced by Siri.

The system is able to bypass the need for Face ID, Touch ID, or any other kind of biometric authentication on a separate device, instead using a "similarity score" to verify a user's identity. This similarity score may be based on multiple variables, such as the proximity of other nearby devices belonging to the connected device's owner. Nevertheless, Apple says that biometrics could still be used to increase the accuracy of the similarity score. To authenticate a user based on biometrics with AirPods themselves, Apple proposes playing and receiving ultrasonic sounds inside the headphones:

For example, various characteristics of the user's ear provide an echo of the ultrasonic signal which is unique to the user. Variations in the surface of the user's ear canal may cause the ultrasonic signal to reflect off the surface and generate an echo having a signature that is associated with the user. For example, a user having a larger ear canal may result in an echo having a longer reverberation time than a user having a smaller ear canal.

Apple adds that AirPods could also use information gathered about a user's gait and voice from the AirPods' gyroscopes, accelerometers, and microphones to determine if they are the owner of the connected device. Collectively, these various data points provide an overall similarity score that could authenticate users if it reaches the required threshold.

Apple often adds new features to existing AirPods devices using firmware updates, such as support for the Find My network, Conversation Boost, and Spatial Audio, so seems it plausible that AirPods user authentication could theoretically be added in a future update. Patent filings are not representative of Apple's immediate plans, but they do show some of the company's specific areas of research and development.

Other recent Apple patent filings included designs for all-glass iPhones and Apple Watches, a removable MacBook key that works as a mouse, and a hydration sensor for the Apple Watch.

TheYayAreaLiving ?
The theft/loss of AirPods will become so useless for the thieves. If granted, total game-changer. Good luck with unlocking the Airpods.
Score: 11 Votes (Like | Disagree)

It’s not protected by 5th amendment tho

That's why I always wipe my ear prints away after committing crimes.
Score: 9 Votes (Like | Disagree)

ruka.snow
If someone is gross enough to wear second hand AirPods more power to whatever weird fetish they have.
Score: 7 Votes (Like | Disagree)

I hope they never get into the smart underwear business.
Score: 7 Votes (Like | Disagree)
Read All Comments