A number of developers are upset with an increasingly problematic iCloud server issue that is causing some apps that have implemented ‌iCloud‌ support to fail to sync properly. 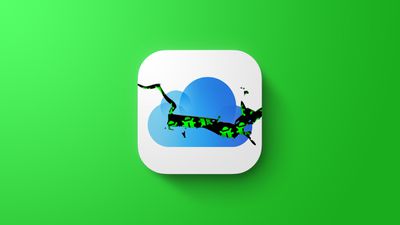 As outlined on the Developer Forums and on Twitter, there are CloudKit connectivity issues that have been occurring since November. Some users of apps that have ‌iCloud‌ support built in are seeing the following message: "Request failed with http status code 503."

The developers behind popular note taking app GoodNotes have been seeing the problem frequently enough that they wrote a support document for customers who are running into the error message. The GoodNotes team says that the app automatically retries to connect and thus the issue gets solved eventually, but they're not sure what's causing the connectivity error to begin with.

HTTP 503 is a temporary error code ("Service unavailable") indicating iCloud servers aren't responding correctly to requests from your devices. The error typically gets resolved as GoodNotes automatically retries, but we're getting many reports of the error lingering on, causing sync failures.

This issue is not apparent to us and we've escalated the case to Apple Technical Support team for investigation. It seems it's happening to other apps as well.

Some developers have noted that their apps have worked without issue for years prior to the sudden appearance of the ‌iCloud‌ server issue that is apparently causing the error message. From a developer on Apple's forums:

A handful of developers have been able to get help from Apple engineering, and one was able to change their ‌iCloud‌ container for their developer account to fix the issue, but there appear to be many developers who are still having issues.

Ok, there’s clearly an issue going on with iCloud sync right now affecting a lot of users across many different apps. What’s the best way to report this? Radar? I haven’t made any changes to my app since October and users have just recently started reporting sync failures. — Becky Hansmeyer (@bhansmeyer) January 24, 2022

Other developers have resorted to building ‌iCloud‌ status dashboard into their apps so customers can see when ‌iCloud‌ is non-functional.

iCloud errors seem to have really increased over the last couple of days. Wonder how many devs have to add these for Apple to I don’t know fix the problems or at the very least publicly acknowledge them. https://t.co/KmukmZkYEu — Paul Haddad (@tapbot_paul) January 21, 2022

iCloud sync is randomly breaking: https://t.co/WuSzylEtwE ^ A quick write-up on what’s been going wrong for me and others with iCloud of late and — as it turns out — for far longer than people realised. This is not good. — Craig Grannell (@CraigGrannell) January 24, 2022

‌iCloud‌ failures are a major problem for app developers because the end user of the app doesn't know that it's an Apple issue, so customers blame the app developers for a non-working sync feature that they have no control over.

I'm pretty sure it started with the release of the new OSs - actually, I am sure I started hearing of iCloud syncing problems with the betas. If I had to guess, I'd say they rewrote something on the client side. — James Thomson (@jamesthomson) January 24, 2022

Multiple developers have reported the ‌iCloud‌ syncing bug to Apple, but it has gone widely unaddressed based on the number of complaints and the fact that the issue has seemingly persisted for at least the last couple of months. It's likely that the problem popped up with the launch of iOS 15 and its sister updates, and it's not clear when a fix might be available.

iCloud Drive returns a 503 error (service unavailable) since Nov. and it's affecting all apps that use iCloud Drive. @AppleSupport has not done anything about this and more AppleIDs are being affect.
The @GoodNotesApp is one of those: https://t.co/TwKO99symK@MacRumors @9to5mac — RawMean MeanRaw (@MeanRaw) January 24, 2022

Customers experiencing ‌iCloud‌ issues should be aware that it's likely an issue on Apple's end and not a bug that app developers can address at this time.
Tag: iCloud
Related Forum: Apple Music, Apple Pay/Card, iCloud, Fitness+
[ 163 comments ]

PsykX
I'll continue to say it : iCloud has never been reliable.
I assume it's because its foundations come from the defunct MobileMe service.
Score: 50 Votes (Like | Disagree)

ouimetnick
iCloud syncing has always been unreliable. Remember how long it took them to fix iCloud tabs in safari? Old tabs closed weeks ago would reappear, support promised a fix was coming, but never really did. Eventually it started working again for most folks though, and we think you’re gonna love it.
Score: 26 Votes (Like | Disagree)

Apple should really consider investing all the profitable money into iCloud data warehouses.

They did. The money just didn’t sync to the iCloud account yet. /s
Score: 23 Votes (Like | Disagree)

goonie4life9
Not to worry, everyone! I just finished talking to a Senior Advisor who has been talking with Engineering. The Senior Advisor assured me that this if this were an issue, Apple would know about it before any customer or developer experienced it because Apple interacts with iCloud billions of times a second. So, to troubleshoot this known issues, Engineering stated folks need to completely remove iCloud from their devices. This does not mean sign-out from iCloud but rather completely uninstall iCloud from each and every device you own, by dragging iCloud to the trash, emptying the trash, and re-starting your devices. Now, the Senior Advisor acknowledged there is no way for the customer to do this. So, because customers cannot follow the troubleshooting steps from Engineering, Apple's Official Position on the Matter is that no further support will be provided until the customer follows the steps provided by Engineering and the customer must keep their devices up-to-date with the latest OS.
Score: 22 Votes (Like | Disagree)

alexe
I find iCloud synchronization in general to be super unreliable and intransparent.

In the finder on my Mac, files often show for an eternity that they are currently uploading or downloading, with no indicator of the progress or if anything is happening at all.

Same thing with the Photos app both on my iPhone and on my Mac. Sometimes, even very few items take extremely long to finish synchronizing without any apparent reason.

Sometimes files don't sync at all, ever, and it's unclear why.

iCloud is the only cloud service out there where you sometimes have to apply absolute brute-force work-arounds like "try to delete the stuck file and add it again, then it might sync" ?
Score: 19 Votes (Like | Disagree)

jdb8167
Someone in Apple management should dig up the video of S. Jobs berating the original MobileMe team for it not working. Then push the video to the computer of every iCloud team member.
Score: 19 Votes (Like | Disagree)
Read All Comments