WhatsApp has rolled out a new feature to users of its beta app that adds the ability to continue listening to a voice message after you've exited the chat thread it was received in. 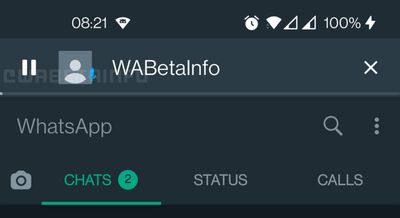 WhatsApp has been working on a global voice note player for some time to let users listen to voice messages in the background while navigating around the app.

Currently, if you play a voice note and then exit the chat thread in which the note was received, playback stops. The idea of allowing playback to continue is so that you can still listen to long recordings while composing and reading other messages.

In the latest beta, if you play a voice note and then switch to the WhatsApp home screen or to a different chat thread, a new voice message playback interface appears at the top of the app with buttons to pause, resume, or dismiss the voice note, along with a progress bar.

According to WABetaInfo, the feature has been released to some iOS testers of WhatsApp Beta and WhatsApp Business Beta, but not all, so if you can't listen to voice notes when you exit a chat, sit tight and wait for the next beta update when it should roll out more fully.

It's not known when the global voice note player will go mainstream, but given the feature is now available to both Android and iOS users on the beta, it shouldn't be too long.

This is the second feature WhatsApp has trialed in 2022. Last week it began testing a feature that displays profile pictures in iOS system notifications when users receive new messages from chats and groups.

WhatEvs... I prefer iMessage as it is still encrypted as far as I am aware and if not VPN is my failsafe. I wish MacRumours would add a, 'meh' emoji (?) for comment replies to their articles.

You might wanna check your assumptions. If your iMessages go to iCloud they are not encrypted...
Score: 3 Votes (Like | Disagree)

soyazul
the never-ending copy of telegram, by WhatsApp... It reminds me of Microsoft copying constantly to Apple.
Score: 2 Votes (Like | Disagree)

EmotionalSnow
One wonders why it took them so long to add this.
Score: 1 Votes (Like | Disagree)

k27
And again macrumors promotes WhatsApp. WhatsApp is a messenger that is the opposite of privacy. Facebook gets the metadata through WhatsApp. They usually say more than the content of the messages.
It's bad enough that so many people use this messenger.
Why does macrumors have to promote it as well? How does this fit in with the emphasis on privacy on Apple's site?
Score: 1 Votes (Like | Disagree)

Kylo83
Everything is always in beta with them
Score: 1 Votes (Like | Disagree)
Read All Comments

Wednesday February 2, 2022 5:35 am PST by Tim Hardwick
Telegram has updated its iPhone and iPad app with several new features, including new easy-to-make video stickers, better reactions, interactive emoji, improved navigation between chats, and other additions and improvements. Telegram's video stickers have proven a popular feature on the chat platform, and in the latest version of the app, support has been added for stickers converted from...
Read Full Article • 80 comments