What to Buy With the Apple Gift Card You Unwrapped

Apple gift cards are always a popular gift for Christmas and other holidays. If you unwrapped one this year, we've put together a list of 23 ways to spend it, with all of the ideas for what to buy costing under $100 in the United States. 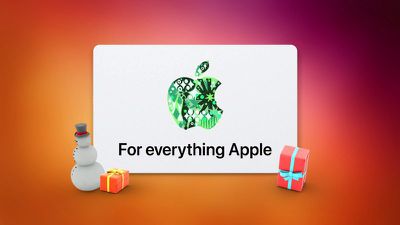 Keep in mind that Apple used to offer two separate gift cards, including an Apple Store gift card for in-store products and an iTunes gift card for purchasing content like apps, games, TV shows, and movies. These gift cards have since been combined into the all-in-one Apple gift card, which says "the gift card for everything Apple" on the packaging.

To redeem an Apple gift card on an iPhone or iPad, open the App Store, tap your photo in the top-right corner, and tap Redeem Gift Card or Code.

What to Buy With an Apple Gift Card

Clean your iPhone and other devices with Apple's polishing cloth, which has become something of a meme since it was released in October 2021.

Apple's extra-long 2-meter Lightning to USB-C cable allows you to comfortably charge your iPhone in situations where a power outlet is a little out of reach.

Keep track of your belongings with Apple's item tracker, which integrates with the Find My app on iPhone. A four-pack is also available for $99.

Twelve South's AirFly Pro accessory lets you use AirPods or Beats wireless headphones with an airplane's in-flight entertainment system. Simply plug AirFly Pro into the headphone jack on a plane to watch or listen with your AirPods.

Have an Apple Watch? Treat yourself to a new band, with dozens of options to choose from, including the custom-fitted Solo Loop.

Have an iPhone? Treat yourself to a new case, with dozens of options to choose from, including those from third-party brands like OtterBox.

Spider-Man: No Way Home is currently playing exclusively in theaters, but for those who would rather wait to watch the film at home, it can be pre-ordered now through Apple's TV app for $19.99 so that you're ready to watch when the film is made available on demand. You won't be charged until you download the film.

Apple's MagSafe Charger attaches magnetically to the back of any iPhone 12 or iPhone 13 model for wireless charging at up to 15W speeds.

Apple's leather MagSafe Wallet attaches magnetically to the back of any iPhone 12 or iPhone 13 model and can store up to three credit cards or IDs. The latest version of the MagSafe Wallet also supports Find My so can you track the wallet's location if you lose it.

Apple's MagSafe Battery Pack attaches magnetically to the back of any iPhone 12 or iPhone 13 model, providing additional battery life on the go.

Redeem your Apple gift card and use the balance towards a Disney+ subscription through the Disney+ app on the App Store.

Redeem your Apple gift card and use the balance towards a YouTube Premium subscription through the YouTube app on the App Store.

Available in white or black, Belkin's BOOST↑CHARGE PRO 2-in-1 wireless charger stand with MagSafe includes a built-in MagSafe Charger for iPhone 12 and iPhone 13 models, as well as a Qi wireless charging base for AirPods.

With a W1 chip for easy pairing with Apple devices, the Beats Flex are entry-level wireless headphones with a cord between each earbud.

15. Save With an Annual Subscription to Apple Music

Redeem your Apple gift card and use the balance towards an annual Apple Music subscription for $99.99 per year — a savings of nearly $20 per year compared to paying $9.99 per month. Switch from a monthly subscription to an annual subscription in the Settings app on iPhone under Your Name > Subscriptions > Apple Music.

Redeem your Apple gift card and use the balance towards Apple One, which lets you subscribe to multiple Apple services at a discount.

Designed for home or office, the temperature-controlled Ember Mug keeps your coffee or other beverage warm for up to 1.5 hours. A companion app for iPhone and Apple Watch allows you to set your precise drinking temperature for hot beverages, track caffeine consumption, save presets for your favorite drinks, and more.

Available in gray or orange, the Logitech Crayon is a more affordable alternative to the Apple Pencil for drawing on compatible iPad models.

Redeem your Apple gift card and use the balance towards additional iCloud storage, starting at 50GB for $0.99 per month.

Nanoleaf's smart color-changing LED bulb is compatible with HomeKit, allowing it to be controlled with Siri. A three-pack is also available for $49.95.

With a companion iPhone, iPad, and Apple Watch app, the Bluetooth-enabled HidrateSpark 3 smart water bottle helps improve your water intake by tracking your water consumption and glowing when it's time for a drink.

Are you an Apple Watch band enthusiast? Organize your band collection with the von Holzhausen The Watch Band Portfolio, a leather carrying case.

TheYayAreaLiving ?
There is a reason why it made it on top #1 list, Buy the Apple polishing cloth. This will definitely enrich your lives. Let’s get it.

ignatius345
I miss those old "iTunes" cards because they'd frequently go on sale for 15% or even 20% off. I'd buy up a bunch of credit and essentially take a big discount on any app, or in-app purchase or Apple cloud service I used.
Score: 4 Votes (Like | Disagree)

Can we use giftcard to buy apps in Apple's app store? I cannot find a way to do it.

Yes. You just redeem the card into your apple account and it becomes part of your overall balance. You can use that balance for anything Apple related.
Score: 4 Votes (Like | Disagree)

sw1tcher
? Apple polishing cloth was the first thing you thought of?

#17 (Ember Mug)... ?‍♂️ Do people really need an app controlled mug to keep their beverage warm? What a waste of resources. Grab a Yeti mug for $25-$30 instead.

B4U
The infamous cloth on the top of the list? Thanks for the good laugh that we all needed. ?
Don't forget to use it for in-app purchases as well.
Score: 3 Votes (Like | Disagree)
Read All Comments

Thursday December 8, 2022 2:45 am PST by Sami Fathi
Apple yesterday announced that end-to-end encryption is coming to even more sensitive types of iCloud data, including device backups, messages, photos, and more, meeting the longstanding demand of both users and privacy groups who have rallied for the company to take the significant step forward in user privacy. iCloud end-to-end encryption, or what Apple calls "Advanced Data Protection,"...
Read Full Article • 168 comments

Thursday December 8, 2022 7:05 am PST by Joe Rossignol
iOS 16.2 is expected to be released next week following nearly two months of beta testing. With last-minute additions like Apple Music Sing and Advanced Data Protection, the software update now has over a dozen new features for the iPhone. Below, we've recapped many of the new features coming with iOS 16.2, including Apple's new whiteboard app Freeform, two new Lock Screen widgets, the...
Read Full Article • 86 comments

Hands-On With the DaVinci Resolve Beta for iPad