Apple's built-in Time Machine backup solution for macOS appears to be causing problems for some Mac users running the latest versions of Monterey and Big Sur, based on a steady trickle of reports on both the MacRumors Forums and Reddit. 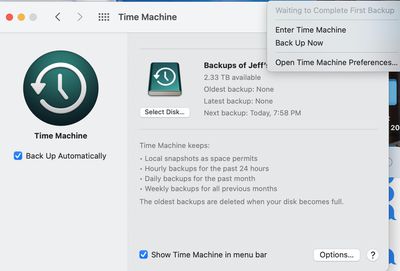 While some users are complaining of different issues with Time Machine on different Macs and versions of macOS that are hard to replicate, one common complaint in particular has surfaced regarding Time Machine backups not completing for M1 Mac users running Monterey 12.0.1 or Big Sur 11.6.1.

The issue seems to occur when Time Machine runs its first backup after either Monterey/Big Sur is first installed or the operating system is updated to the latest point release. Time Machine says it is "Waiting to Complete First Backup," but as it appears to be reaching its conclusion, Time Machine suddenly reports "Oldest backup: None" and "Latest backup: None," and then fails to offer any notice that the initial backup has successfully been performed at all.

On a new machine (M1 MAX) with fresh update of Monterey 12.0.1, set up new (not migrated from a previous machine) It has been impossible to finish a first time machine. I have tried two freshly formatted drives (APFS encrypted) one mechanical and one SSD. The backup finishes takes a couple of hours, and the status is "waiting to complete first backup". My case is now with a senior Apple engineer. Trying new backup with drive directly connected to MBP and no encryption. Something is broken with Time Machine.

I'm having the exact same issue. Been wrestling with it for a week now. Time machine runs its first back up. Then appears to not have run a backup at all. Snapshots are there, but no files in finder and the time machine is not recognized by other computers as a time machine that could migrate a backup. Apple seems to be saying this is an issue with Monterey, but they aren't sure why yet.

I'm having the exact same problem with an identical setup (M1 Max, Monterey 12.0.1, TM on external Thunderbolt 3 hard drive). TM has not completed its first backup and many days...reports "Waiting to Complete First Backup". I've reformatted and restarted twice with the same result--TM does not report any completed backups.

I wish that I had searched the forums earlier. I have wasted countless hours troubleshooting through two reinstalls and with 3 different SSDs. My issue with Time Machine is that it performs backups but there are no notifications of their completion. Moreover, Time Machine reports "Oldest backup: None" and "Latest backup: None". Also, Finder does not show any files present on the SSD. However, Get Info reports gigabytes of disk usage. I purchased a $2,500 MacBook Pro 14-inch with the intention moving out of "Wintel". It is not going to happen — at least not now.

Some users report clean installing macOS or running the first backup in Safe mode has sorted out the problem for them, but that's not the case for everyone and a universal solution remains hard to come by for most of those affected.

Some users speculate that the issue could be related to an unspecified change to the APFS format that Apple has quietly implemented in recent versions of macOS, but it's still not entirely clear what's going on. We've reached out to Apple for comment and we'll update this article if we get more clarity on the problem, but for those afflicted by the error, the advice for now is to use a third-party backup solution like Superduper! or Carbon Copy Cloner.

flexiboy1912
Stopped using Time Machine years ago as so many issues and size of backups grew out of control, most of the times can't restore anything so needed to start again and deleting the backup from my NAS took hours and hours.

Carbon Copy Cloner much better and you can create bootable images from it
Score: 18 Votes (Like | Disagree)

Macropanda
Time Machine has been broken since Catalina. Worked absolutely perfectly before then but the Catalina did something like making the backups APFS and since then I've had endless corruptions, takes 2-3 minutes to just load the view any time you change dates, backups take significantly longer etc as well as missing options like no longer being able to delete all backups of a particular folder/file.

Apples entire OS/Software has been getting less reliable for years and a backup is the thing you can always fall back to when the worst happens. But if the backup system is less reliable than the main OS then its worrying.
Score: 17 Votes (Like | Disagree)

Looks like you are waiting a very long time before upgrading your Macs.
Score: 9 Votes (Like | Disagree)

BootsWalking
The only thing worse than a backup program that can't create a backup is one that can't restore from a backup.
Score: 7 Votes (Like | Disagree)

Me and several others have reported this via the Feedback-app on macOS Monterey 12.0.1 and 12.1 and it's been marked by Apple as "Potential fix identified - For a future OS update" so the fix won't come with the release of 12.1.

My temporary solution is to use Carbon Copy Cloner instead.
Score: 6 Votes (Like | Disagree)

I have a drive dedicated to Time Machine. Last week I discovered that it was corrupted and First Aid could not fix it. Not sure what caused this. I had to wipe the drive and start again. Now it's OK.

That's what I kept finding too , after months of backups all useless now. Flawed product if you can't rely on it to recover from
Score: 6 Votes (Like | Disagree)
Read All Comments