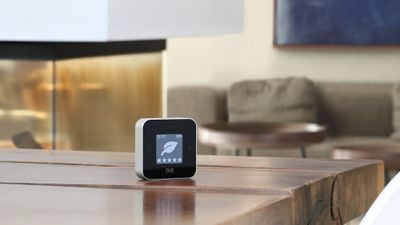 Design wise, the updated Eve Room looks similar to the existing second-generation Eve Room, with an e-ink display that shows the current room conditions. The major new addition is Thread integration for better connectivity with other smart home products. According to Eve, it now offers 10 products that work with HomeKit over Thread.

Eve CEO Jerome Gackel said that Thread has been "a spectacular success" for Eve, and in the "not too distant future," a Thread network will be "just as common as Wi-Fi." Eve Room is designed to join a Thread network automatically, and it works with both Bluetooth and Thread. Note that for Thread connectivity, a device that serves as a Thread Border Router is required, such as the HomePod mini.

Eve Room is able to detect volatile organic compounds in the air, which can be harmful to people and pets. It also provides temperature readings and allows users to keep track of humidity. Data can be viewed on the device itself, and it also syncs to the Eve app.

The third-generation Eve Room is available from the Eve website for $99.95.

I’ll never understand this company…
„Mmh, we have this Air Quality Monitor, which does the same like the $10 Aqara sensor, but ours has to be charged every 6 weeks, has micro USB and a cheap display, what do we charge for that?“
„$100“
„Sounds right, it’ll be $99,95“

The difference is that Eve stuff is hassle-free.
Not all of it -- the Eve Button is a LOUSY product, their bluetooth extender even worse. But most of the stuff (like the room monitoring and the smart plugs) just does what it is meant to do, reliably and without drama.

This doesn't sound like a very high bar, but you would be amazed... It works properly with HomeKit, reports battery status properly, updates FW properly, doesn't require its own stupid hub, doesn't require a once-a-month dance of some sort or power-cycling because it's stopped working, etc etc

Some of us are just so tired of so much poorly performing s#$t out there that we are willing to pay extra for stuff that just works.
And the things you knock are real pluses. I bought the Eve monitor precisely because I wanted BOTH
- can put it next to the bed to see temp and humidity at a glance
- but also can use it to trigger automations
- and also can see long-trend history in the Eve app.
All three of these are valuable, and the first requires both a screen and battery (so I can place it where it's convenient).
(And claiming charging every six weeks sounds very high to me. I'm not tracking it closely, but I'd say it's closer to perhaps every four to six months.)
Score: 3 Votes (Like | Disagree)

I have the old version and think it's great, but think it's the only thing I now own which requires a micro USB cable to charge it. Disappointing.
Score: 3 Votes (Like | Disagree)

has to be charged every 6 weeks, has micro USB and a cheap display

Seriously. All 3 are huge dealbreakers for me.
Especially micro USB. That has no place in 2021. Even my cheapo espresso scale charges using USB-C.
And a 6 week battery is laughable. Who has time for that?!
Score: 2 Votes (Like | Disagree)

Interesting idea but I'm not sure what I'd do with this information. I have an air purifier running and it ramps up automatically if air quality dips (usually when we're cooking or vaccuuming). And if I didn't have an air purifier, I guess I'd just use this to tell me... to open a window?

And that's not even getting into the the bigger question of why the hell I'd ever need to monitor my apartment's air quality when nobody's home.

I guess other people have different needs than me, but I think we're seeing a lot of "smart" products that are really of dubious utility.

(a) you can see trends in temperature and humidity
(b) you can easily see the temperature at a glance, no looking at your phone
(c) you can use the humidity sensor to trigger a humidifier to turn on and off. (This requires a "dumb" humidifier which just runs [or doesn't] depending on whether it has power, but these are available, eg the classic Honeywell round red one)

(Of course you could also trigger automations from the temperature sensor, but most people have a thermostat for that -- though you might, for example, want to control blinds?)

Sorry, not buying it. I mean, if you work hard enough I'm sure there's some weird edge case one can invent as a "reason" to look up one's indoor air quality from the office. But again, if you're not home you 1) aren't breathing the air and 2) can't do anything about it anyway except 3) let your air purifier run which it would probably just do automatically using its own sensor.

This is true. I was just trying to indicate a possible use.

It's a Dyson with a HEPA filter. Even with a good vaccuum, you're disturbing things and dust is going to get into the air. All you have to do is vaccuum in a sunny room to see that happening.

You are cleaning the filters in water & completely drying them once a month, right? ? But yeah, you're right the exhaust can cause some un-vacuumed dust to become airborne.
Score: 2 Votes (Like | Disagree)

I have the old version and think it's great, but think it's the only thing I now own which requires a micro USB cable to charge it. Disappointing.

This is for me a reason not to buy it.

Companies need to be punished for making stupid decisions.
Score: 2 Votes (Like | Disagree)
Read All Comments