Notability users have been left frustrated and annoyed after the developer of the popular Mac and iOS note-taking app revealed on Monday that it has switched to a subscription-based model, and that key features included in original app purchases will stop functioning after one year. 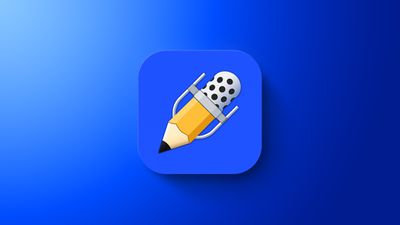 Previously available as a one-off $8.99 purchase, Notability for iPhone, iPad, and Mac is now free to download on the App Store, but not all the features are available in the "freemium" version, and those that are included have editing limitations.

To get "the full Notability experience" offered by version 11.0 of the app now requires an annual $14.99 subscription, which includes unlimited note taking and access to additional features that are otherwise available as in-app purchases.

As far as it affects current users who purchased the full app, key features will become non-functional after one year, after which they will have to subscribe to retain the feature set they originally paid for. In other words, no grandfathering scheme is currently being offered. Addressed to those users, a Medium post from the Notability Blog explains:

Thank you for your support all these years. You will be able to continue using Notability as you do now for the next year for free. You will continue to have access to any items or technology you previously purchased. If you would like access to more premium content or technology like MyScript's Handwriting Recognition and Math Conversion, you may choose to subscribe at any point. After the year is up, you can choose to become an annual subscriber or use the free version of Notability.

Thousands of Notability users have taken to Twitter and Reddit to express their frustration with the unexpected change.

Astonished that @NotabilityApp is moving to a subscription model. I happily paid for the Mac and iOS versions of Notability separately all the way back in 2015, and it's accompanied me through 3 degrees now. Very disappointed there is no grandfathering in; will be switching. — Colin Whaley, MSc (@colin_whaley) November 1, 2021

Congrats, I really loved notability and convinced multiple friends to purchase it. Now I feel bad about having them ripped in with me. Maybe you should have focused more on developing features, that users can use without paying for them, instead of just making more money. — Benedict (@Benedict_Sth) November 1, 2021

As many users have pointed out, on the face of it, the change appears to violate Apple's App Store Review Guidelines, which state "if you are changing your existing app to a subscription-based business model, you should not take away the primary functionality existing users have already paid for." We've reached out to both Notability and Apple for comment.

Notability has garnered an Apple Editors' Choice spot and is regularly a top-ranked app worldwide on the App Store. The app has gained widespread popularity with students and teachers alike, as it includes a variety of note-taking, journaling, and drawing tools, and can be used to mark up imported documents.

The other popular note-taking app for iOS and Mac that Notability is often compared to is GoodNotes, which remains available as a one-off $7.99 purchase on the App Store.

Several popular apps have switched to subscription models in recent years as a way to stave off dwindling income after years of free updates, but some developers have taken a different and less divisive approach.

For example, just over a year ago the developers of popular paid-for camera app Halide released Halide Mark II as a whole new app, and gave it to all users of the original app for free, with all the new features and updates free for a year. After the year is up, the app continues to work, but to get additional features requires an optional subscription or a one-time purchase.

Andy-V
You don't do that.

If you want to move to a subscription model, you launch a new version and leave the old one alone. You don't remove stuff people have paid for and demand more cash.
Score: 128 Votes (Like | Disagree)

TallGuyGT
If they want to transition to a subscription model, they should rename this version “Notability Classic” and freeze the feature set, while providing security updates and bug fixes. Going forward they can sell the new subscription based Notability. Grandfathering is the right thing to do.
Score: 70 Votes (Like | Disagree)

I dislike subscriptions as much as the next guy, but I can see why the developers need to have a source of income to keep up development. I personally prefer the system used in apps like Agenda where you only (voluntarily) pay for new features as they are released and get to keep any feature you've previously bought indefinitely.

We are not talking about liking/disliking subscriptions. We are talking about someone paying for an app with "features" and then having the rug pulled out from under them. Please do not conflate subscriptions with douchebaggery.
Score: 63 Votes (Like | Disagree)

Quu
Very clear case of them violating the app store guidelines. I hope Apple comes down on them over this.
Score: 60 Votes (Like | Disagree)

Copy/Paste if you want: As of the new update to Notability (version 11.0), the developer has stated those who purchased the app before it was free will only have the functionality they paid for, for the next year, and will then be downgraded to the free version. This is against App Store guidelines section 3.1.2(a) which states that an app switching to a subscription model cannot remove features for those who have previously purchased the app.