Several customers awaiting deliveries of their new redesigned MacBook Pros are being told that their shipments are being delayed due to "mechanical" issues impacting UPS, a courier used by Apple to ship its devices worldwide. 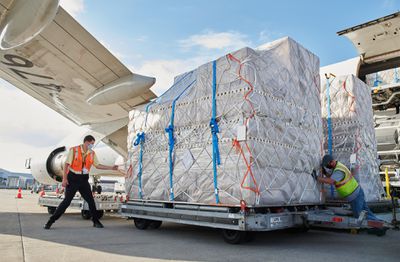 "A mechanical failure has caused a delay" is the message several customers are being told when they track their new MacBook Pro shipment. Customers on the MacRumors Forum are also reporting that UPS is sending emails to customers informing them of unknown mechanical failures and that estimated delivery dates will vary depending on the conditions on the ground.

The mechanical failures, possibly about aircraft, are causing shipments of MacBook Pros, and presumably, other consumer electronic devices, to be left stationary on the ground in cities in China. Some shipments are still on-the-ground in Shanghai and Seoul, South Korea, and publicly available flight records show few UPS flights scheduled to depart either city today, at the time of writing.

Cologne, Germany, serves as one of UPS' main hubs in Europe and is where MacBook Pro shipments are likely to arrive from Asia before being sent to customers across Europe. One UPS flight from Seoul to Cologne that was scheduled for later today has been canceled, as noted on Reddit. Customers are also sharing their frustrations on Twitter.

@UPS has “mechanical issues” and my shipment has been stuck in China for days. Classic UPS experience @Apple @AppleSupport should know better and ship with @DHLGlobal instead. — petroluseum (@petroluseum) October 27, 2021

@UPS A mechanical failure has caused a delay. We will update the delivery date as soon as possible. / Your parcel is on the way. Now that sounds horrible. What’s going on? — Richard Jacobs (@ReinventorNL) October 27, 2021

"Your shipment is currently within the UPS network; however, an unforeseen event has occurred which could result in a change to the scheduled delivery date" is another message being broadcast to customers. Customers awaiting delivery for their new MacBook Pros should keep an eye out on their tracking page for any updates. Customers can also keep a close tab on the MacRumors Forums for updates.

It remains unclear if other Apple shipments, such as the newly launched third-generation AirPods, are also being impacted.

sniffies
They have their UPS and downs, just like any other company. They'll fix it.
Score: 84 Votes (Like | Disagree)

SBlue1
Wow some people here are so out of touch. The plane may have had technical problems and it needs to get fixed. And people are like I don’t care if the pilots die in an unsafe machine give me my MacBook now!

I remember my train was cancelled due to a suicide, someone jumped onto the tracks and got hit, and some selfish hipsters at the train station were yelling at the poor railway staf trying to help. Like I don’t care for the reason and I don’t want to use the next train in one hour I want you to put a replacement train on the tracks right now! It’s a sad Me Me Me society we live in.
Score: 38 Votes (Like | Disagree)

was that a packaged joke?

No, I'm using a low spec computer to do my work while I wait for this to arrive. I quit my job to build a startup and had to give back my old computer last week so I have two options. Expect this MBP to turn up before I have to return the temporary mac mini to apple within the 2 week window or buy another computer because apple can't fulfil their delivery dates.

Quite amazing you can't imagine any scenario where people need these to arrive in a timely manner.

This seems like poor planning on your part, not an issue with UPS or Apple.

I find it amazing that some folks just want to live their lives by the skin of their teeth. If you are seriously building a business, try some strategic planning.

Don’t build a house of cards that will fall if UPS is a day or two late.
Score: 30 Votes (Like | Disagree)

madmin
even the planes can't handle the weight of these laptops ;)
Score: 23 Votes (Like | Disagree)

Some of us need these to do our work and are relying on their shipment dates being accurate.

This is your first or only computer and you suddenly have work to do?
Score: 22 Votes (Like | Disagree)
Read All Comments

Friday September 10, 2021 2:12 am PDT by Sami Fathi
Several Apple products, including recently launched devices, are currently experiencing delayed shipping times, a possible sign that the ongoing chip shortage could be more significantly impacting Apple and its products. During the company's third-quarter earnings call, Apple CEO Tim Cook warned that the chip shortage that has plagued the industry for the last few months would impact iPhone...
Read Full Article • 33 comments

Monday October 25, 2021 5:30 pm PDT by Juli Clover
It's already Tuesday, October 26 in New Zealand, Australia, and multiple countries in Asia which means it's MacBook Pro launch day. Customers in New Zealand and Australia are always the first to get their hands on new devices due to time zone differences, and the new MacBook Pro models are no exception. 14 and 16-inch MacBook Pro models are beginning to arrive to customers who pre-ordered last ...
Read Full Article • 111 comments

Wednesday January 19, 2022 11:30 am PST by Dan Barbera
It's now been a few months since the M1 Pro and M1 Max MacBook Pro models launched in October, and MacRumors video editor Dan Barbera has been using one of the new machines since they debuted. Over on the MacRumors YouTube channel, Dan has shared a three month review of his MacBook Pro to see how it has held up over time and how it's changed his workflow. Subscribe to the MacRumors YouTube ...
Read Full Article • 202 comments

Monday January 10, 2022 7:50 am PST by Mitchel Broussard
Amazon today has Apple's 256GB 13-inch M1 MacBook Pro for $1,149.99, down from $1,299.00. As of writing, the notebook is in stock but with a slight shipping delay; it's currently estimated to be delivered between January 18 and 22. Note: MacRumors is an affiliate partner with some of these vendors. When you click a link and make a purchase, we may receive a small payment, which helps us keep...
Read Full Article • 26 comments