watchOS on the Apple Watch Series 7 is optimized for its larger display. Now, Apple executives Alan Dye and Stan Ng have explained some of the rationale behind watchOS's tweaks for the Series 7 in an interview with CNET. 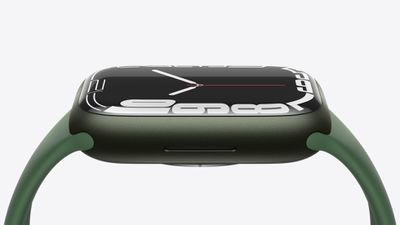 Alan Dye is Apple's vice president of interface design and Stan Ng is the company's vice president of product marketing. They explained that Apple chose to increase the display size of the Apple Watch with the Series 7 due to a need for easier-to-read text to improve accessibility:

We had the opportunity to allow users to increase the point size [for text] even larger than we've allowed for in the past. That was very much motivated by the new display... [it will be] far more useful and accessible to a lot of users who just need the larger point size.

Ng said that the refractive border of the ‌Apple Watch Series 7‌'s front crystal drove the company's design decisions for watchOS and explained how the refractive edge works:

This refractive edge creates this very subtle wraparound effect. And it makes the screen appear to bend downward, right toward the watch housing. Really, it's an optical effect, it's due to the way the light from the OLED refracts at the edges of the front crystal. We redesigned that crystal to be more of a dome shape, which also contributed to the thicker crystal and the greater durability. So it was kind of a twofer for both.

The decision to create watch faces that emphasize the curvature of the display's edges apparently came after the development of the new front crystal. Dye said that "Once we started to play with this new crystal and the display, that's where all those subtle design decisions were made to push those ticks out to the very edge of the display to highlight some of these effects."

The Apple Watch offers a full on-screen keyboard for the first time with the Series 7 that also works with QuickPath. According to Dye, Apple chose not to add distinct areas for each key to make the keyboard less cramped, but also to suggest to users that "precision isn't totally critical with your taps because we have that intelligence built-in."

Dye said that despite the extra screen space, Apple still views the Apple Watch as a device intended to be used briefly, just like the original 2015 model:

I think a lot of those core foundational values around how we manage to watch the news remain the same. Despite the fact that we are able to allow for more content on the display, we still see it as a glanceable, smaller, shorter-interaction type of a product versus something like a phone or certainly an iPad.

Ng added that he sees the larger screen of the ‌Apple Watch Series 7‌ mainly as a tool to "consume that information faster and easier."

It isn't about the 30 minutes you're spending looking at your phone and social media, or the hour on your Mac working on a document. The power of Apple Watch is in those hundreds of glances a day that might give you information that you need right at that moment.

Dye suggested that Apple still sees watchOS as distinct from iOS and iPadOS, with the fundamental concept of the Apple Watch working well. Looking to the future, he said that "we're always thinking about the future, we're always looking at and challenging the language we have."

The initial design we spent a great deal of time on. I think we got a lot of things right, especially as a wearable device that was really built for comfort on the wrist. We're pretty pleased with where it's at from the design perspective.

As critical as the hardware is at playing the role distinguishing Apple Watch as Apple Watch, we think the watch faces play a pretty big role there as well, which is why we've been so careful over the years, despite the fact that there's wide variety, to have a lot of consistent design elements. If you look closely, the watch hands are always drawn exactly the same way, despite the fact that they show up in different colors. We think we struck a really good balance. The watch faces themselves, they provide a canvas for third parties for sure, and a template that they can [use to] create multiple complications and turn a watch face into their watch face, and that becomes the interface in some ways for their application.

See the full interview for more information about the design decisions around the ‌Apple Watch Series 7‌'s larger display.

Did they dodge it? Seemed like they said very directly that they want to control what the watch face looks like to make sure it is distinctly an Apple Watch. They don't see that changing anytime soon. Whether the specific examples they gave are exhaustive or not could be debated I guess.
Score: 9 Votes (Like | Disagree)

jonnysods
Imagine if they released a tool where you could design your own watch faces. Would be pretty amazing!
Score: 9 Votes (Like | Disagree)

DMG35
I'm a big fan of the larger display. I didn't really appreciate the pictures of it but when I actually put it on I love even that tiny bit of more space. It makes everythign on the watch better imo.
Score: 8 Votes (Like | Disagree)

Did they dodge it? Seemed like they said very directly that they want to control what the watch face looks like to make sure it is distinctly an Apple Watch. They don't see that changing anytime soon. Whether the specific examples they gave are exhaustive or not could be debated I guess.

To me it's a dodge. They explained they wanted the control but didn't explain why they wouldn't allow other designers to provide different options.
Score: 7 Votes (Like | Disagree)

TheYayAreaLiving ?
Ahhh, Apple is over here justifying themselves.
Score: 6 Votes (Like | Disagree)
Read All Comments

Wednesday November 3, 2021 10:57 am PDT by Juli Clover
The Apple Watch Series 7 comes in new 41mm and 45mm size options and it has the largest display of any Apple Watch to date, a design challenge that Apple executives called "unique" in an interview with The Independent. Implementing the new design without major increases to the casing size required "completely re-engineering the display, the front crystal, the internals and the internal...
Read Full Article • 82 comments

Thursday September 2, 2021 1:02 pm PDT by Juli Clover
Apple is developing several new watch face options that will take advantage of the larger screen size of the upcoming Apple Watch Series 7 models, reports Bloomberg. The Apple Watch Series 7 models will come in 41mm and 45mm body sizes, up from the current 40mm and 44mm sizes. For the 45mm model, the screen will measure in at 1.9 inches diagonally, up from 1.78 inches, and it will have a...
Read Full Article • 95 comments

Thursday October 14, 2021 2:27 am PDT by Sami Fathi
The Apple Watch Series 7 officially hits the shelves and starts arriving with customers worldwide tomorrow. While we have seen media reviews of the new watch, we've yet to see a clear real-world comparison to last year's Apple Watch Series 6 until now. Apple says the new Apple Watch Series 7 features a 20% larger screen than the Series 6, primarily thanks to reduced bezels that allow the...
Read Full Article • 229 comments

Tuesday September 14, 2021 12:27 pm PDT by Tim Hardwick
Coinciding with the new Apple Watch Series 7 debut, Apple has unveiled some new watch faces that will be exclusive to the new model. Amongst the new faces are Modular Max, Contour Face, and Nike Bounce, the latter of which is exclusive to the Series 7 Nike edition. The Modular Max displays the digital time alongside a single complication, and includes longer complications that display...
Read Full Article • 95 comments

Tuesday September 14, 2021 12:10 pm PDT by Sami Fathi
Thanks to the larger display on the Apple Watch Series 7, users can now use a full keyboard right on their wrist. Users will be able to tap or slide across letters to type, in which case watchOS will use "machine learning to predict the word you’re typing." The new Apple Watch Series 7, which comes in larger 41mm and 45mm sizes, features larger displays compared to the Series 6 thanks to...
Read Full Article • 57 comments

Thursday November 18, 2021 10:14 am PST by Juli Clover
Apple today released watchOS 8.1.1, a minor update to the watchOS 8 operating system that came out in September. watchOS 8.1.1 comes three weeks after the launch of watchOS 8.1, an update that added SharePlay Fitness+ group workouts and other features. ‌‌watchOS ‌8.1.1 can be downloaded for free through the dedicated Apple Watch app on the iPhone by going to General > Software Update....
Read Full Article • 62 comments