Google today announced its latest flagship smartphones, the Pixel 6 and the Pixel 6 Pro. The two new devices are already garnering positive reviews for their high-end feature set available at an affordable price tag. 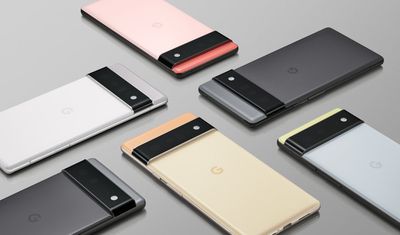 Priced at $599 and $899, respectively, the Pixel 6 and Pixel 6 Pro are Google's first smartphones that are equipped with the Google Tensor system-on-a-chip, which Google designed. Apple has long used mobile chips that it designs in house, and Google's choice to design its own Tensor chips will allow for better integration of hardware and software.

As we saw in photos prior to the launch of the new smartphones, the Pixel 6 and Pixel 6 Pro have a unique unibody look with a rear camera bar and an edge-to-edge display with hole punch cutout for the front-facing camera.

According to Google, the matte black camera bar is designed to provide a "clean, symmetrical" design. The Pixel 6 devices are available in several colors, each with a two-tone design.

Both the Pixel 6 and the Pixel 6 Pro have an improved 50-megapixel wide angle camera that lets in 150 percent more light, and both are also equipped with a 12-megapixel ultra wide lens. The Pixel 6 Pro has an additional 48-megapixel telephoto lens that supports 4x optical zoom and "Super Res Zoom" up to 20x.

Google has also introduced new camera features, such as Magic Eraser, which removes unwanted objects from an image. There's a Motion Mode with Action Pan and Long Exposure, and a Real Tone addition that is designed to make photos look more true to life. Google consulted photographers, cinematographers, and colorists to improve its auto enhancement features.

The Tensor chip allows for AI improvements, with the new smartphones offering better speech recognition and language understanding models. With Live Translate, Pixel 6 users can message people in different languages, with support for English, French, German, Italian, and Japanese. Apple has added a Translate app for these kind of translations, but Google's version works right in the messaging app.

Both smartphones support 5G with mmWave speeds available, and the Pixel 6 Pro also includes an Ultra Wideband chip for better indoor positioning. The Pro also features 12GB RAM compared to 8GB in the Pixel 6, and it supports up to 512GB of storage.

For those interested in a hands-on look at the new Pixel 6 smartphones, several media sites have already done reviews.

The Pixel 6 and Pixel 6 Pro can be pre-ordered starting today, and will launch on October 28.

kiensoy
Those are good prices, especially for the specs.
Score: 28 Votes (Like | Disagree)

till
Camera bar looks weird for sure, but I bet it's a lot more stable than camera bump phones when it's lying on a flat surface.
Score: 22 Votes (Like | Disagree)

Matthew.H
That camera bump is somehow worse than the iPhone one.
Score: 18 Votes (Like | Disagree)

Sullivan0930
Curious to see how the magic eraser works. I mean I know it’s just a clone/stamp tool, but curious how the AI would handle it. Im all for Google building a successful SoC. More competition the better.
Score: 15 Votes (Like | Disagree)

AmazeSE
Forgot there was a Google event today lol.
Score: 14 Votes (Like | Disagree)