Apple has made much of its iPhone 13 battery life improvements, noting for example that the 13 Pro Max offers the longest battery life ever in an iPhone. However, when you look at Apple's own battery comparisons versus the iPhone 12 lineup, it's the streaming video performance that the company has eked out of its new smartphones that really stands out. 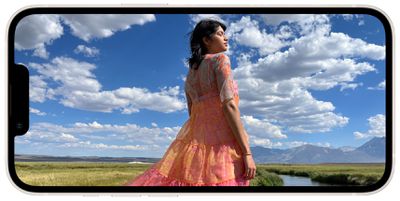 The iPhone 13 lineup features new low-power displays, a more efficient A15 chip, larger batteries, and more power-efficient components, all of which make for dramatic improvements when streaming, as the numbers above show.

For example, Apple claims that when streaming video, the iPhone 13 Pro and Pro Max last nine hours and 13 hours longer than last year's equivalent models, respectively. Taking the same metric, the battery in the iPhone 13 mini manages 13 hours, which is longer than even the iPhone 12 Pro Max.

With video streaming services so ubiquitous these days, not to mention Apple TV+ (and obliquely, Fitness+), Apple has clearly factored the computations involved into the power optimizations that it has achieved through the tight integration of its hardware and software.

Of course, battery life varies by use case and many other factors, so actual results will vary, but if they're anything near what Apple is claiming, binge-watching your favorite show should be a cinch on these latest devices.

(H/T to Jack for pointing this out!)

DNichter
This is the first time in years I have zero desire to upgrade my iPhone, but this is pretty impressive.
Score: 21 Votes (Like | Disagree)

Serban55
of course, that is what promotion is all about
watching video at 24hz will save battery a lot more than stuck on 60hz like all other iphone had it
Score: 17 Votes (Like | Disagree)

of course, that is what promotion is all about
watching video at 24hz will save battery a lot more than stuck on 60hz like all other iphone had it

I suspect a lot is due to promotion limiting display power consumption.

LarrySW
That is a tremendous gain. Nice big leap in tech.
Score: 11 Votes (Like | Disagree)

Given that some of us had horrible experience with our iPhone 12 Pro Max batteries, I honestly hope that they have rectified and improved them in the 13 series. :confused:

9 months old, 128 cycle, 89% battery health. Went from amazing 2 day battery life, to needing to use low power mode just to make it through the day on a same usage pattern. As it's not 80% or below, Apple Support Rep said nothing is wrong with my battery and can't (won't) replace it under warranty. Sigh.
Score: 8 Votes (Like | Disagree)

ian87w
Should be good news for the mini fans as battery life was one of the 12 mini's downside.
Score: 6 Votes (Like | Disagree)
Read All Comments