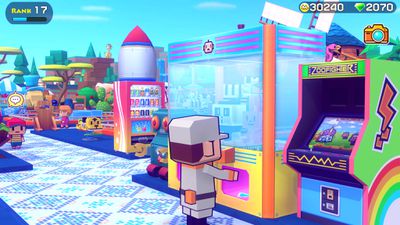 Zookeeper World
"Zookeeper World" from Kiterestu is a new installment in the "Zookeeper" action puzzle game series that will be available exclusively on Apple Arcade. Players will face a variety of challenging match-3 puzzles and collect coins while placing animals, equipment, and plants to increase the zoo's charm to attract more visitors. Players will be able to expand and customize their zoo, upgrade their animals to be unique, and more.

"Zen Pinball Party" from Zen Studios is a pinball game that will feature table designs inspired by DreamWorks Animation and Hasbro brands. Players will challenge their friends and family for the highest score on tables featuring Trolls, Kung-Fu Panda, How to Train Your Dragon, MY LITTLE PONY, Theatre of Magic, Attack from Mars, and more.


In addition, Apple Arcade roleplaying game "Fantasian" from Mistwalker will be receiving a "Part 2" update on Friday. Apple says the latter half of the saga will feature a more quest-driven style of gameplay that can take anywhere between 40 to 60 hours for players to experience. The game was written by Final Fantasy creator Hironobu Sakaguchi.

Fantasian
Priced at $4.99 per month or $49.99 per year, Apple Arcade provides access to a catalog of around 200 games without ads or in-app purchases across the iPhone, iPad, Mac, and Apple TV, with additional titles added periodically.
Tag: Apple Arcade Guide
[ 36 comments ]

macar00n
Hey guys I'm having trouble deciding which party to go to. Should I go with these guys:

More pointless adventure games where you walk around doing nothing, great. ??‍♂️

I'm actually enjoying having apple arcade. I find it very cheap and nice for quick pick up games, there are some gems in the collection. I now really only buy game's i've really followed or AAA titles now.

I am all in on that Pinball whenever it ships :) I’ve enjoyed some of their older tables and even some of the licensed ones. Wonder how often they’ll release new tables?

Zen pinball! Now this is something I will enjoy from Apple Arcade. I have all the old tables I think. I am missing some star wars tables I am sure. But this will be great.

I feel like the second group is more easy going and fun but the first group will listen to me complain as much as I want which is important to me. But the downside of that is that I'd have to listen to them complain too. I can't decide. Thanks for your help any feedback is appreciated
Score: 9 Votes (Like | Disagree)

More pointless adventure games where you walk around doing nothing, great. ??‍♂️

It's a Match 3, Pinball, and JRPG.
I don't think I'm splitting hairs to say your comment of "pointless adventure games" has no relation to the content of the story.
Score: 5 Votes (Like | Disagree)

nwcs
Cue the moaning and griping of people who probably haven’t played any of the games in the Apple Arcade or think the only games in there should be the ones they like to play…
Score: 3 Votes (Like | Disagree)
Read All Comments