Nintendo today announced that it is sunsetting Dr. Mario World for iOS, a game that launched just two years ago. According to Nintendo, service for Dr. Mario World is set to end on Monday, November 1. 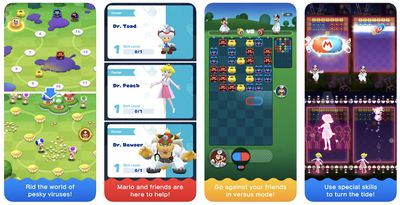 As of today, diamonds, the game's in-app currency, are no longer available for purchase. Starting on November 1, Nintendo says an end-of-service notification will be displayed and the game will not be playable.


Players will be able to look back at their player history in "Dr. Mario World Memories," a web page that Nintendo plans to launch later this year. This website will use player history, and customers can avoid being included by deleting their save data in the app.

Dr. Mario World is a puzzle game based on the well-known Dr. Mario Nintendo title. Players are tasked with matching capsules with viruses in order to clear out all the viruses on the board, and Nintendo characters like Peach, Bowser, Koopa Troopa, and Goomba appear in the game.

Like Nintendo's other titles, Dr. Mario World is a free-to-play game that included optional in-app purchases, but apparently the game failed to catch on.

Bloomberg last year said that Nintendo is "retreating" from its mobile game plans, focusing on already-released titles rather than debuting new games. Nintendo has had success with games like Fire Emblem Heroes and Dragalia Lost, but has not been able to maintain sales momentum.

Give us a proper super Mario game already, instead of a crappy running game. ?‍♂️?

That is never going to happen. You need to buy a switch if you want that lmao.
Score: 19 Votes (Like | Disagree)

LFC2020
Give us a proper super Mario game already, instead of a crappy running game. ?‍♂️?
Score: 14 Votes (Like | Disagree)

4jasontv
This sort of thing is the problem I have have with software developers. It's not as profitable as they would have liked so they are 'pulling it'. If a business wants to enter the software as a service model they need to be prepared to support it indefinitely, unlock all the DLC at no cost, or release the code. With the App store being so locked down the second option is likely the most feasible, but under no scenario should they be able to pull it.

And before people start claiming that customers don't own the software - that's the very problem we need to solve.
Score: 8 Votes (Like | Disagree)

GermanSuplex
Pretty disappointed in Nintendo’s iOS offerings. I know their goal was to entice players to buy home consoles, but I was hoping they’d help reshape the mobile game landscape. Mario Run was a decent if underwhelming first effort, but Mario Kart and Dr. Mario on mobile felt like the same mundane cash grabs that most mobile games with in-app purchases are, just with a nice Mario paint job.

Luckily, Apple Arcade is picking up the slack. The remastered classics and new games are starting to become better and better, all with no in-app purchases or ads.

Maybe Nintendo will one day be a little more lenient with their IPs and make a solid game to sell on mobile. I’ve got no qualms paying $10-$25 on a mobile game if it’s worth it.
Score: 8 Votes (Like | Disagree)

Mobile gaming is > 50% of all video game revenue.

While true, a very significant portion of that revenue comes from in-app purchases for currency or "premium" unlock subscriptions.
Score: 7 Votes (Like | Disagree)
Read All Comments

MacRumors Giveaway: Win an iPhone 13 Pro to Celebrate the Launch of 'RPG Dice: Heroes of Whitestone'

Wednesday February 9, 2022 9:01 am PST by Juli Clover
We've teamed up with WIMO Games to offer MacRumors readers a chance to win an iPhone 13 Pro to celebrate the launch of strategy board game RPG Dice: Heroes of Whitestone, which came out recently and can be downloaded from the App Store. RPG Dice: Heroes of Whitestone is a tabletop-style strategy game where the goal is to roll the dice to move across the board, engaging in battles, buying...
Read Full Article • 23 comments