Apple has decorated some of its retail stores around the world with a series of colorful stripes that are designed to celebrate the International Collection of Apple Watch bands that were released in June. 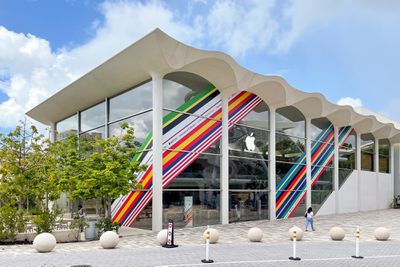 Several photos of the decorated Apple Store locations have been shared on Twitter, showing off stripes in different country colors. Both the new Apple Watch bands and the striped ‌Apple Store‌ decorations come ahead of the 2021 Olympic Games that are set to begin in Tokyo, Japan on Friday, July 23. Apple Stores in Japan, Italy, the U.S., and other countries are featuring the new design.

Bands are priced at $49.99 each and feature the same design and materials as other Sport Loop options. Apple has also made matching watch faces available.

themachugger
This is uncharacteristically hideous for Apple Store decorations.
Score: 6 Votes (Like | Disagree)

JosephAW
What? No Taiwan? :rolleyes:
Score: 6 Votes (Like | Disagree)

Attirex
The pandemic is over!

Apple_Robert
I see the Great Britain 44mm band is still sold out.
Score: 2 Votes (Like | Disagree)
Read All Comments