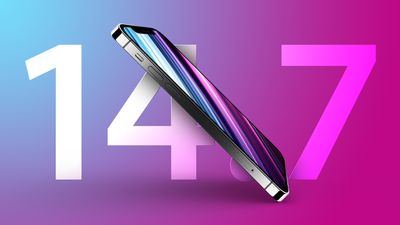 iOS and iPadOS 14.7 can be downloaded through the Apple Developer Center or over the air after the proper profile has been installed on an iPhone or iPad.

Apple in iOS 14.7 expands the Air Quality Index feature to additional countries that include the Netherlands, France, Italy, Spain, and Canada. When paired with the accompanying HomePod 14.7 software, iOS 14.7 will allow the Home app to manage timers on a ‌HomePod‌ or a HomePod mini. Full release notes for the update are below:

The iOS 14.7 update also addresses a bug that caused the ‌iPhone‌'s WiFi to stop functioning if connected to a WiFi network that was named "%p%s%s%s%s%n." Connecting to a network with this name could seriously impact the ‌iPhone‌'s functionality, but it isn't an issue after installing iOS 14.7.

I bet public beta at 1pm, and public release tomorrow or later this week
Score: 6 Votes (Like | Disagree)

nymphe
Battery drain on ios14.6 is so bad, that I'm walking with a powerbank for the first time with my iphone xs max. I hope 14.7 solves this issue.
And no, I don't want to restore from scratch.
Score: 6 Votes (Like | Disagree)

Sad that you are willfully staying on a very old OS when you could be enjoying the features of a new OS. iOS 14 is amazing.
Score: 4 Votes (Like | Disagree)

Why, what's the point of holding out for that?
Score: 3 Votes (Like | Disagree)
Read All Comments

Saturday February 4, 2023 1:30 am PST by Hartley Charlton
Google's Chromium developers are working on an experimental web browser for iOS that would break Apple's browser engine restrictions, The Register reports. The experimental browser, which is being actively pursued by developers, uses Google's Blink engine. Yet if Google attempted to release it on the App Store, it would not pass Apple's App Review process. Apple's App Store rules dictate...
Read Full Article • 234 comments