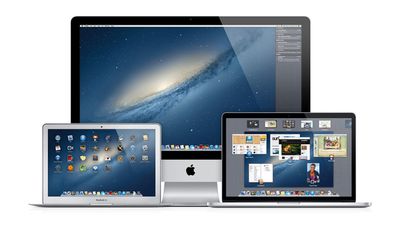 Apple has kept OS X 10.7 Lion and OS X 10.8 Mountain Lion available for customers who have machines limited to the older software, but until recently, Apple was charging $19.99 to get download codes for the updates.

As of last week, these updates no longer require a fee, and can be downloaded from the OS X Lion and OS X Mountain Lion support documents on Apple's website.

Mac OS X Lion is compatible with Macs that have an Intel Core 2 Duo, Core i3, Core i5, Core i7, or Xeon processor, a minimum of 2GB RAM, and 7GB storage space.

Macs that shipped with Mac OS X Mavericks or later are not compatible with the installer, however.

The $19.99 fee dates back to when Apple used to charge for Mac updates. Apple began making Mac updates free with the launch of OS X 10.9 Mavericks, which also marked the shift from big cat names to California landmark names.

Mavericks was free to download, and Apple has not charged for Mac software since then outside of the legacy Lion and Mountain Lion updates. Apple also used to have OS X 10.6 Snow Leopard available for a fee, but it is no longer purchasable.

Unregistered 4U
Just another money grabbing move from Apple! (you KNOW someone’s going to spin it that way :)
Forcing people to buy old Macs in order to use the FREE software. We’re ONTO you, Apple!
Score: 40 Votes (Like | Disagree)

ZipZilla
Should have downloads for every OS so people can use old computers.

adcx64
Great news knowing I won't have to pirate it 10 years from now when those Macs become retro enough for me to have fun with.
Score: 16 Votes (Like | Disagree)

brunerd
And just the other day I was lamenting the fact I didn't have a proper installer for 10.7...
OMG - Naming conventions Apple, plz!

And if you think opening the DMG will clarify? No.

Amazing Iceman
About time. It seems they ignored this for a very long time!
Score: 12 Votes (Like | Disagree)
Read All Comments

Wednesday March 24, 2021 12:00 am PDT by Juli Clover
On March 24, 2001, a Saturday, Apple began allowing customers to purchase Mac OS X, the successor to the classic Mac OS. The first version of Mac OS X, "Cheetah," was famous for its "Aqua" interface with a water bubble-style design for everything from windows to buttons. Today, March 24, 2021, marks 20 years since Mac OS X went on sale, and Apple's Mac software has gone through many changes...
Read Full Article • 284 comments

Wednesday June 30, 2021 4:34 pm PDT by Juli Clover
Throwboy, known for its line of pillows designed to look like classic Apple devices, has debuted a new series of throw blankets that are modeled after classic Apple operating systems. The 80s OS blanket is designed to look like the Classic Mac OS with a menu bar that sports File, Edit, View, and Special options on a gray background, with a floppy disk icon and trash icon. There's also a ...
Read Full Article • 46 comments

When to Expect Apple to Release macOS 12.1 With SharePlay and More

Wednesday December 1, 2021 9:05 am PST by Joe Rossignol
Apple released macOS Monterey in late October, but we are still waiting on several promised features such as SharePlay and Universal Control to be made available through subsequent software updates like macOS 12.1, which is currently in beta testing. The first macOS 12.1 beta enabled SharePlay on the Mac, allowing developers to prepare their apps to support the feature. SharePlay, which is...
Read Full Article • 35 comments