The iPhone 12 series has now sold over 100 million units and powered the first iPhone sales super-cycle since the launch of the ‌iPhone‌ 6, according to Counterpoint Research. 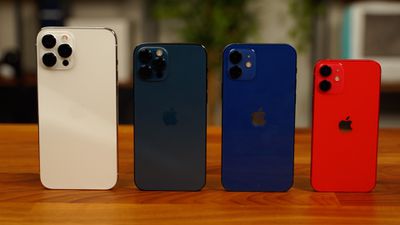 The ‌iPhone 12‌ lineup passed 100 million sales in April, meaning that the devices achieved the landmark figure within seven months of its launch. By comparison, this is two months earlier than the iPhone 11 series that launched in 2019, and almost the same as the ‌iPhone‌ 6, which powered a sales volume super-cycle around the 4G transition in 2014 and 2015. This means that the ‌iPhone 12‌ series is the first volume super-cycle ‌iPhone‌ in six generations of the device.

Counterpoint analysis explained that in the case of the ‌iPhone‌ 6 series, sales were supported by pent-up demand for bigger-screen iPhones, while for the ‌iPhone 12‌ series, 5G connectivity and OLED displays across the lineup were the predominant factors in attracting customers.

The volume super-cycle is expected to lead to record-breaking revenue with the average selling price for iPhones being at an all-time high. The impressive sales performance of the ‌iPhone 12‌ also gave Apple a record-high market share for April. It has also consistently achieved a record-high market share in the US since October 2020 and the trend is expected to continue.

Consumer preferences also changed between the ‌iPhone 11‌ and ‌iPhone 12‌ lineups. Consumers showed more interest in the iPhone 12 Pro Max, with a 29 percent share of sales, during the first seven months after its launch compared to the iPhone 11 Pro Max, which had a 25 percent share of sales. This is also one of the reasons for the ‌iPhone 12‌ series grossing 22 percent more revenue than the ‌iPhone 11‌ series in the first seven months after launch.

Sales in the United States accounted for 40 percent of global ‌iPhone 12 Pro Max‌ sales until April. The ‌iPhone 12 Pro Max‌ was supported by aggressive operator promotions, making it the best-selling device in the U.S. consistently since December 2020.

The ‌iPhone 12‌ series was also comparatively less affected in terms of sales by the global health crisis than the ‌iPhone 11‌ series, which saw reduced sales as customers held onto their devices more than usual. In addition, a large proportion of users who kept their previous smartphone due to uncertainty during the global health crisis last year upgraded to an ‌iPhone 12‌ once it became available.

azentropy
Thanks to the 12 mini! I know this will get downvoted, but this is the first time in a long time Apple offered a smaller premium iPhone. There was some pent up demand for that although not as much as Apple apparently hoped for.
Score: 20 Votes (Like | Disagree)

Nimrad
Still after reading the article I have no idea what a supercl-cycle is.
Score: 15 Votes (Like | Disagree)

Scotticus
Whoa, MacRumors went a whole iPhone article without ******** on the Mini at all!
Score: 10 Votes (Like | Disagree)

TheYayAreaLiving ?
This is amazing! Congrats to Apple and iPhone!

Best product in this world ?

architect1337
People upgrading from the last 'super-cycle' from iPhone 6 / 6S to latest.
Score: 7 Votes (Like | Disagree)

greenbreadmmm
Coincidentally, I have never seen more carrier deals offering the phone for basically "Free" with trade in.
Score: 6 Votes (Like | Disagree)
Read All Comments

Friday October 22, 2021 6:27 am PDT by Mitchel Broussard
Woot today has a wide collection of refurbished previous generation iPhone models at record low prices, perfect for anyone in need of a new iPhone and willing to opt for one a few years old instead of the latest version. iPhones in this sale include iPhone 11, iPhone 11 Pro, iPhone 11 Pro Max, and more. Note: MacRumors is an affiliate partner with some of these vendors. When you click a link...
Read Full Article • 32 comments