Apple today celebrated the grand opening of its new retail store at the historic Tower Theatre in Downtown Los Angeles, and Apple's CEO Tim Cook and retail chief Deirdre O'Brien were both in attendance for the occasion. 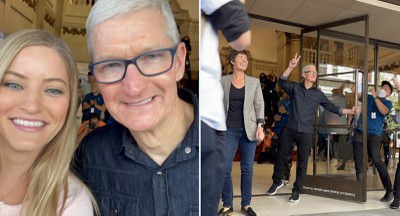 Other notable individuals in attendance included YouTubers such as Justine Ezarik (iJustine), who shared the photos above, and Brian Tong.

As usual, Cook posed for photos with attendees and celebrated alongside retail employees as the first customers entered the store.

Apple Tower Theatre is one of Apple's most significant restoration projects to date. Apple said it collaborated with leading preservationists, restoration artists, and the City of Los Angeles to thoughtfully preserve and restore the theater, which was designed in 1927 by renowned motion-picture theater architect S. Charles Lee.

StupidOpinion
iJustine is perhaps the biggest apple shill in the universe
Score: 34 Votes (Like | Disagree)

HeavenDynamic
Had the chance to speak briefly to Tim while he was in Paris a few years ago. Very friendly and open guy!
Score: 24 Votes (Like | Disagree)

Wildkraut
Apple is mutating from a tech company to a company for fashion victims.
Score: 22 Votes (Like | Disagree)

BWhaler
I hate to be a hater, but it’s an accurate characterization:

satchmo
The nearly 40 year old woman who acts like a 19 year girl. I wouldn’t doubt if the majority of her followers are teenage boys.
Score: 14 Votes (Like | Disagree)

Apple is mutating from a tech company to a company for fashion victims.

It's always been like that. It was at it's worst when the iPod was really popular back in around 2004/05 with the dancing silhouette commercials. People were (and still are) easily influenced. I remember subways in Toronto would be filled with people with white headphones. You knew they had an ipod. It got so bad, people didn't really even know that alternatives existed (back then Cowon MP3 players were way better). Apple furthered this (very subtle) brainwashing via their evangelical marketing (thanks to Guy Kawasaki) and running with the term 'podcast', although not invented by them, this led people to believe that only apple devices could play internet radio streams.

There's been a loooooot of manipulation of the public by Apple over the years. Nothing illegal, but they've definitely had a hand in cultural influence.
Score: 11 Votes (Like | Disagree)
Read All Comments

Thursday July 22, 2021 4:28 am PDT by Tim Hardwick
Apple today celebrated four decades of the company's presence in Singapore, which was just 16 years old as a nation when Apple's first office opened there in 1981. Apple Marina Bay Sands retail store In a press release, Apple hailed its base for Asia Pacific operations as a globally recognized center of innovation and expertise, dedicated to embracing a "high-tech vision for the future." "We'...
Read Full Article • 46 comments

Friday July 30, 2021 9:04 am PDT by Sami Fathi
Tesla CEO Elon Musk reportedly once demanded that he be made Apple CEO in a brief discussion of a potential acquisition with Apple's current CEO, Tim Cook. The claim comes in a new book titled "Power Play: Tesla, Elon Musk and the Bet of the Century," as reviewed by The Los Angeles Times. According to the book, during a 2016 phone call between Musk and Cook that touched on the possibility of ...
Read Full Article • 279 comments

Tuesday June 22, 2021 10:26 am PDT by Sami Fathi
Ahead of its grand opening later this week on June 24, Apple today shared photos of its upcoming "Apple Tower Theatre" retail store in Los Angeles. The store will reside in the historic Tower Theatre originally designed in the heart of Los Angeles in 1927. Apple has collaborated with the local community, leading preservationists, and artists to "thoughtfully preserve and restore the...
Read Full Article • 86 comments

Wednesday August 4, 2021 7:53 am PDT by Hartley Charlton
Apple CEO Tim Cook has fallen to eighth place on a list of the highest-paid CEOs and executives in the United States last year despite earning more than the previous year, according to Bloomberg. Cook was paid $265 million in 2020, mainly comprising stock awards and a bonus as in previous years, making him the eighth highest-paid executive in the United States. Last year, Cook was paid...
Read Full Article • 187 comments

Tuesday July 6, 2021 6:30 am PDT by Joe Rossignol
Apple CEO Tim Cook is attending the Sun Valley Conference in Sun Valley, Idaho this week alongside many high-profile guests, including Facebook CEO Mark Zuckerberg, according to NPR. Described as a "summer camp for billionaires," the annual media conference is hosted by private investment firm Allen & Company and allows media and tech moguls to negotiate deals in between leisure activities such...
Read Full Article • 68 comments

Thursday April 29, 2021 6:39 am PDT by Sami Fathi
Apple today reminded customers that the brand-new redesigned 24-inch iMac, the M1-powered iPad Pro, and the updated, more powerful Apple TV 4K will be available for pre-order starting tomorrow, Friday, April 30, and will begin shipping in the second half of May. Subscribe to the MacRumors YouTube channel for more videos. In its Newsroom update, Apple didn't disclose when the new devices...
Read Full Article • 126 comments

Friday July 16, 2021 12:27 pm PDT by Juli Clover
Apple has decorated some of its retail stores around the world with a series of colorful stripes that are designed to celebrate the International Collection of Apple Watch bands that were released in June. Image via Storetellee Several photos of the decorated Apple Store locations have been shared on Twitter, showing off stripes in different country colors. Both the new Apple Watch bands...
Read Full Article • 24 comments