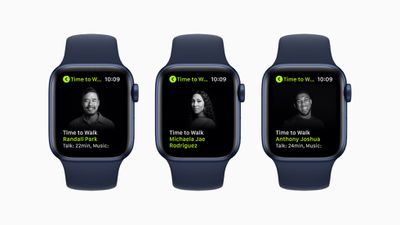 "Time to Walk" launched in January and features audio stories from influential people that Apple Watch users can listen to with AirPods or other wireless headphones while walking. The episodes are automatically downloaded to the Apple Watch with an Apple Fitness+ subscription, and users can start an episode directly from the Workout app.

Starting June 28, users can listen to an episode from "Jane the Virgin" star Gina Rodriguez, who talks about learning resilience from her dad and how she built confidence in everything from her body image to feeling part of a community.

On June 28, Apple Fitness+ will also be getting a new "Artist Spotlight" series, where the entire playlist for a workout is dedicated to a single music artist, starting with Alicia Keys, Jennifer Lopez, Keith Urban, and Lady Gaga. Apple said new workouts featuring each artist will appear in Apple Fitness+ every Monday for four weeks.

Last, Apple Fitness+ will be getting a new series of workouts from renowned fitness expert Jeanette Jenkins. On June 28, seven workouts with Jenkins focusing on high-intensity interval training and strength will be available.

Apple Fitness+ launched in December 2020, providing subscribers with access to a library of workout videos in the Fitness app, with new content added on a weekly basis. The service integrates personal metrics such as heart rate from the Apple Watch to motivate users, animating them on the screen during key moments in the workout.

kevinpdoyle
I was very satisfied when I found the setting to turn these off on my watch.
Score: 10 Votes (Like | Disagree)

Mrjynx
I've been pleasantly surprised how insightful these episodes have been.
Score: 8 Votes (Like | Disagree)

So when will it be available in more countries? An english version would probably be fine for most people, at least in Europe(?)

Agreed! I'd rather have the English version than some simpler production or even worse, dubbed, something that we very rarely do in Sweden (because it sucks).

Just release it and people may decide for themselves. I think it would be an instant hit in many European countries in English.
Score: 5 Votes (Like | Disagree)

Expos of 1969
Naomi Campbell ??? Yet again, Tim's impeccable judgement shines through. Will she regale us with tales of how she physically and mentally assaulted her poor personal assistant(s)?
Score: 5 Votes (Like | Disagree)

BruiserB
I've enjoyed these....even the episodes about people I had never or barely heard of.
Score: 4 Votes (Like | Disagree)
Read All Comments

Monday December 14, 2020 6:55 am PST by Joe Rossignol
Apple's new Fitness+ workout service launches later today, and ahead of time, some media outlets and YouTube channels have shared their first impressions of the platform. We've gathered up some opinions and videos below. CNET's Vanessa Hand Orellana trying out Apple Fitness+ As a refresher, Fitness+ will provide users with access to a library of workout videos covering strength, yoga, dance,...
Read Full Article • 144 comments