Some of the world's richest countries have today reached a landmark agreement to close international tax loopholes used by some of the biggest multinational corporations, including big tech companies like Apple, Google, and Amazon (via Reuters). 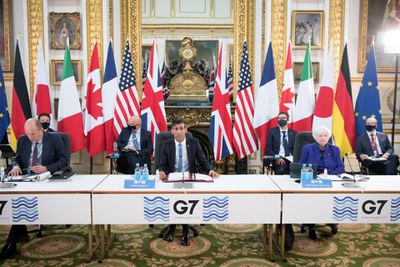 At the G7 summit in London, representatives of the U.S., UK, France, Germany, Canada, Italy, and Japan reached an agreement on a coordinated effort to support a minimum global corporation tax rate of at least 15 percent and committed to ensure that multinational corporations pay taxes in the countries where their business operates.

"After years of discussion, G7 finance ministers have reached a historic agreement to reform the global tax system to make it fit for the global digital age," said the United Kingdom's Chancellor of the Exchequer, Rishi Sunak.

The joint accord, which is expected to form the foundation of a global pact next month, is aimed to stop what U.S. Treasury Secretary Janet Yellen called "thirty-year race to the bottom on corporate tax rates," where countries have felt compelled to slash tax rates and introduce exemptions to remain appealing to corporate giants.

The deal will put pressure on other countries to follow suit and join the agreement. A meeting of the G20 next month is expected to continue the talks with a wider group of nations, including Argentina, Australia, Brazil, China, India, Indonesia, Mexico, Russia, Saudi Arabia, South Africa, South Korea, and Turkey.

Any broader, final agreement could have repercussions for low-tax countries and tax havens, such as Ireland, where Apple is headquartered outside the U.S. Low-tax countries are expected to try to build support for a minimum rate as close as possible to around 12.5 percent or seek exemptions.

American multinationals play a significant role in Ireland's economy, attracted by the country's "BEPS" tools, that protect their non–U.S. profits from the U.S. "worldwide" corporate tax system, and provide an effective Irish tax rate of zero to 2.5 percent. As a result, large multinational companies, particularly in the technology industry, such as Apple, Google, Amazon, and Facebook, are expected to be heavily impacted by the new international tax plans.

The agreed minimum corporation tax rate of 15 percent is still above the level in countries such as Ireland, but below the lowest level in the G7. The 15 percent rate is lower than the 21 percent that was expected ahead of the summit, and some countries, such as France, are arguing that the 15 percent rate should be viewed as a base level for setting a higher, more ambitious rate.

A move toward making companies declare their environmental impact in a standardized way, primarily so that it is clearer to investors, was also agreed upon.

If people think that APPLE … is going to take a 15% tax increase and just live with it then think again! How about a 15% increase in their pricing for that shiny new iPhone is more like it. Or like whats happening in the grocery stores it's the same price but less product.

You might want to check your assumptions and your maths… 15% tax would only be a 15% “increase” if they currently paid no tax at all. But even if it did increase by 15%, that’s tax on profit, which is only a fraction of the retail price. So a 15% tax increase does not translate to a 15% rise in retail price.

All that has happened is that prices WILL be going up.

bgraham
Great to see. It’s starting to feel like the end of 50 years of failed trickle down economics.
Score: 31 Votes (Like | Disagree)

ArPe
Good, it will work out.

So there has to be a higher tax and the money gotta be spent on educating young people not to be crooks, be responsible, invest and grow safely, be sustainable not a greedy pig. Education system in the West especially in US is ranked soooo low compared to even Vietnam. No wonder the society wants to fight and eat each other and chase different scams all day.
Score: 28 Votes (Like | Disagree)

we aren't "hit by" our responsibility to society- the same society that enabled us to develop and continue to work with many safety nets and comfort
Score: 17 Votes (Like | Disagree)
Read All Comments