Owners of Eufy home security cameras are this morning reporting seeing live and recorded feeds show up in the Eufy app from other users' cameras, in what appears to be a disturbing breach of privacy and a major malfunctioning of the company's service. 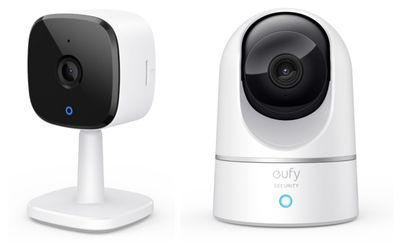 As with many connected domestic security cameras, Eufy cameras offer users the ability to view real-time and recorded streams of video feeds from the devices set up in and around the home. However, many Eufy owners are reporting seeing video feeds from cameras that are clearly not their own, while some users are claiming they are even able to pan and zoom strangers' cameras.

Eufy users on Monday took to Reddit to express their disbelief:

"Having the same issue in Melbourne... can view someone internal/external cameras in Florida, USA Massive security breach and with no way to tell if yours have been breached. EUFY please explain!!!"

"I'm having the same issue. I could access everything on somebody else's account, including the live feed and I was controlling their camera (pan, tilt, rotate). I was able to take video recordings, using the in-app record button, which saved to my phone. The camera I had access to was in the Los Angeles time zone."

"This is EXTREMELY EXTREMELY concerning. I have had my eufy front door camera for just over a month now. I wanted my partner to also have access to the account, so instead of making her a separate account and inviting her, I just logged into my account on her phone. Now here is the troubling part.... Now on her phone she is seeing someone elses front and backyard camera... We can see it live, we have full control over it... Wtf!? This is concerning because if this is happening then how do we know our account isn't somehow being seen by someone else.... Anyone have ANY idea why this would happen?"

Other users have reported similar experiences in the last few hours, and the issue appears to be widespread. Some owners affected by the issue are in the United States, but others are located as far afield as New Zealand, suggesting the breach is global.

On a positive note, the issue doesn't seem to be affecting streams set up using Apple's ‌HomeKit Secure Video‌, which encrypts video footage and stores it in iCloud rather than on servers handled by a third party.

It's not yet clear what's caused the issue, but the best advice for Eufy camera owners right now is to disconnect the devices at least until the breach is resolved. We've asked Eufy for comment and we'll update this article as soon as we learn more.

People not set up for Apple HomeKit deserve getting their privacy breached because they haven’t done their homework.

cmaier
Meanwhile there are people who argue that Apple should be forced to allow every app to use whatever servers for whatever purpose the developers want, because there can’t possibly be any security or privacy implications of that.
Score: 21 Votes (Like | Disagree)

jk1221
Exhibit A why you NEVER put cameras INSIDE your house that go to the cloud.

Outside, meh. People could state at my porch, no loss there really its publicly viewable space anyway really (in my case) ?‍♂️

IMHO "security" cameras are meant for outside- security of the home perimeter. Once someone is inside it is FAR too late (and you already caught them on the outside cams) for inside cams to do anything.
Score: 11 Votes (Like | Disagree)

On a positive note, the issue doesn't seem to be affecting streams set up using Apple's ‌HomeKit Secure Video‌, which encrypts video footage and stores it in iCloud rather than on servers handled by a third party.

One major selling point for HSV then.

steevn
I have both of the cameras shown and now glad I did setup HomeKit Secure Video. HKSV needs some improvements but it’s nice knowing we should all be protected from stuff like this for the most part.
Score: 8 Votes (Like | Disagree)

People not set up for Apple HomeKit deserve getting their privacy breached because they haven’t done their homework.

You either keep your data local with HomeKit or you accept your privacy being breached by having the feeds on the cloud.

HomeKit secure video keeps the recordings in the cloud.
Score: 7 Votes (Like | Disagree)
Read All Comments