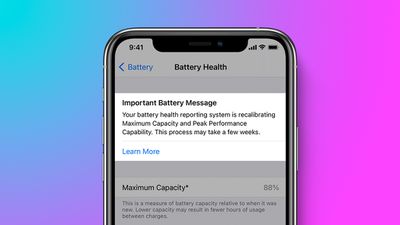 Apple said this process might take a few weeks to be completed, and now that two weeks have passed since the sixth beta of iOS 14.5 was released, some users are beginning to see revised battery health percentages. 9to5Mac writer Benjamin Mayo tweeted that his iPhone 11 Pro's maximum battery capacity relative to when it was new increased from 86% to 90%, for example, and tech website The 8-Bit has compiled other users' results.

In a support document, Apple said this bug with inaccurate battery health reporting does not reflect an issue with an iPhone's actual battery health, and the recalibration process should resolve the issue. Symptoms of the bug include unexpected battery drain or, in a small number of instances, reduced peak performance capability, according to Apple.

While the battery health reporting system is recalibrating, users will see an "Important Battery Message" in Settings > Battery > Battery Health, but the displayed maximum capacity percentage will not change during recalibration. When the process is complete, the new percentage will appear and the message will be removed.

In a small number of instances, recalibration might not be successful and a new battery service message will appear. If this occurs, an Apple Authorized Service Provider can replace the battery free of charge to restore full performance and capacity, according to Apple, but the company ensures there is no safety risk posed to customers.

iOS 14.5 has been in beta testing for over two months and could be released next week. Apple will be hosting a virtual event on Tuesday, April 10 at 10 a.m. Pacific Time, with a new iPad Pro and other announcements expected.

DougieS
Mine went from 84% to 87% after calibration but then to 100% as apple broke a screw repairing my screen and replaced my phone! :D
Score: 7 Votes (Like | Disagree)

MikhailT
This is just an educated guess based on looking at how long it charges, drains and then charge again.

It doesn't actually mean anything. Just because it was 80% and now 90% after this, it does not mean you got 10% more battery. It just means they haven't figured out how to accurately display the health of a chemical reaction based fuel.

All of this is for support only, they have incentives to keep it high as much as possible to avoid people replacing under warranty until warranty expires and they can charge you more for out of warranty replacements.
Score: 6 Votes (Like | Disagree)

This is just an educated guess based on looking at how long it charges, drains and then charge again.

It doesn't actually mean anything. Just because it was 80% and now 90% after this, it does not mean you got 10% more battery. It just means they haven't figured out how to accurately display the health of a chemical reaction based fuel.

All of this is for support only, they have incentives to keep it high as much as possible to avoid people replacing under warranty until warranty expires and they can charge you more for out of warranty replacements.

Bingo. Trying to not have to replace battery under warranty. Seems like Apple has used some inferior battery’s again. Now it’s time to hide the fact again.
Score: 6 Votes (Like | Disagree)

Sorig
No one is really getting more battery out of this. This accomplishes nothing but save Apple some battery replacements.
Score: 4 Votes (Like | Disagree)

Td1970
Why does this sound like the last battery fiasco. Apple hiding something again.
Score: 4 Votes (Like | Disagree)
Read All Comments

Wednesday November 3, 2021 3:14 am PDT by Hartley Charlton
Apple's latest MacBook Pro models have a raft of new features, including the M1 Pro and M1 Max chips, mini-LED displays with ProMotion, an HDMI port, an SDXC card slot, fast charging with MagSafe 3, and more. As the first teardowns start to be shared online, iFixit has revealed a previously unknown improvement with the new machines. In its 14-inch MacBook Pro teardown, iFixit explained that...
Read Full Article

Apple Seeds Fourth Betas of iOS and iPadOS 15.1 to Developers

Wednesday October 13, 2021 10:14 am PDT by Juli Clover
Apple today seeded the fourth betas of upcoming iOS 15.1 and iPadOS 15.1 betas to developers for testing purposes, one week after seeding the third betas and three weeks after releasing iOS 15 and iPadOS 15 to the public. iOS and iPadOS 15.1 can be downloaded through the Apple Developer Center or over the air after the proper profile has been installed on an iPhone or iPad. SharePlay...
Read Full Article • 50 comments