Apple has lost a legal bid to block Swatch from registering Steve Jobs' famous "One more thing" saying as a trademark in the UK, reports The Telegraph. 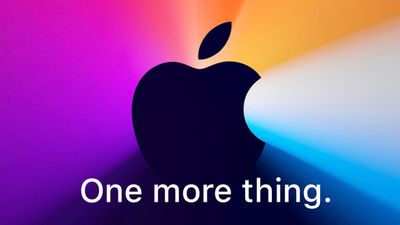 Apple argued that the Swiss watchmaker had trademarked the slogan in "bad faith," as it has been associated with Apple for more than 20 years.

The late Steve Jobs often used the phrase to announce new products at the end of Apple presentations. Apple last used the slogan in reference to its Mac-focused virtual Apple event held in November 2020, when it announced the first Apple silicon Macs.

However, a High Court judge on Monday backed the Swiss watchmaker in the trademark row by overturning a previous decision that went Apple's way, despite the judge acknowledging that Swatch may have trademarked the phrase merely to irritate the tech giant.

On Monday, judge Iain Purvis overturned a previous decision that sided with Apple, saying that even if Swatch had meant to "annoy" Apple, the company could not stop it from doing so.

He added that the phrase may have originated with the 1970s television detective Columbo, a character who was known for cornering criminals by asking them "just one more thing."

This isn't the first time Apple and Swatch have faced off in court over trademark disputes. Apple had already failed to block Swatch from trademarking the phrase in Australia, and in years past the two companies have battled over other phrases commonly attributed to Apple.

In 2017, Apple filed a complaint in a Swiss court over the use of the slogan "Tick Different" in a Swatch marketing campaign, arguing that the watchmaker was unfairly referencing the Apple's 1990s "Think Different" ad campaign for its own gain.

In order to successfully win that case, Apple had to show that Swatch's use of the phrase triggered an association with Apple products in the minds of at least 50 percent of consumers.

Meanwhile, Swatch claimed its use of "Tick Different" had its origins in an 80s Swatch campaign that used the phrase "Always different, always new", and argued that any similarity with Apple was purely coincidental.

Two years later the Swiss court agreed with Swatch that Apple's "Think Different" was not known well enough in Switzerland to warrant protection, and that Apple had not produced documents that sufficiently backed up its case.

Before the Apple Watch launched, Apple and Swatch were rumored to be joining together on a smartwatch, but nothing came of it. Swatch filed an application for an "iSwatch" trademark when rumors first began swirling that Apple planned to enter the market. It later managed to block Apple's own UK trademark application for "iWatch."

PassiveSmoking
Honestly I don't think either company should be allowed to claim a common turn of phrase as their own trademark.

Besides, I think Colombo might be able to claim prior art.

robinp
It’s interesting how many people are commenting here assuming it was Apple that trademarked the phrase. I guess reading the article is too much effort.
Score: 16 Votes (Like | Disagree)

eddjedi
How is it possible to trademark such a generic phrase. What next, good morning? How are you?
Score: 15 Votes (Like | Disagree)

swingerofbirch
It hasn't successfully been used since Steve Jobs anyway.

There used to actually be secrets, and secrets worth having kept secret.
Score: 15 Votes (Like | Disagree)

spyguy10709
Apple should just buy swatch, and give the money back to the shareholders.
Score: 12 Votes (Like | Disagree)

Kabeyun
Of course it does.

I"m slowly getting sick with Apple moves... Soon I won't be able to say "Hello" or "Good morning" without being scared that someone might the police..

Whan u can "claim" a square with rounded edges and sue a company for using a pear logo, your ego/mind gets twisted...

You did read as far as the beginning of the article right? The first sentence, actually? The part where it says that Swatch, not Apple, is pursuing the trademark?
Score: 11 Votes (Like | Disagree)
Read All Comments

Monday July 12, 2021 5:22 am PDT by Hartley Charlton
Lawyers representing Apple have suggested that the company could exit the UK market if the terms of an ongoing patent dispute are "commercially unacceptable" (via This is Money). UK patent holder Optis Cellular Technology is suing Apple for patent infringement after it refused to pay license fees worth around $7 billion for using "standardized" smartphone technology in its devices. Last...
Read Full Article • 201 comments