Qualcomm is having a hard time keeping up with demand for the processor chips that Android manufacturers rely on, reports Reuters. Chip shortages have been impacting multiple industries, and have now hit the electronics business. 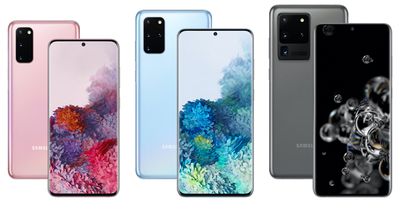 There's no indication that Qualcomm's supply troubles will impact Apple, but smartphone manufacturers like Samsung could be in trouble. Apple develops its own A-series chips that are manufactured by TSMC, but it does use Qualcomm's modem chips.

Samsung and other Android manufacturers rely on Qualcomm's Snapdragon chips to power their smartphones, and demand has soared over the course of the past few months. Qualcomm is facing shortages of some of the subcomponents used in its chips, and the component issues could impact production of mid and low-end Samsung models.

A source told Reuters that Qualcomm's flagship Snapdragon 888 chip is impacted, but it's not clear if this is impacting the manufacturing of Samsung's high-end smartphones. Samsung next week will hold an Unpacked event to unveil its latest mid-range Galaxy A series device, which is expected to compete with the iPhone SE.

An executive at a contract manufacturer for several major smartphone brands said that it was facing a shortage of a range of components from Qualcomm and would cut handset shipments, but it's not likely that this is referring to Apple.

For the most part, the shortages are impacting Qualcomm's older processor technology because Qualcomm is directing key components toward its newer processor options that are more profitable. On Wednesday, Qualcomm CEO Cristiano Amon told investors that Qualcomm's demand is "basically higher than supply."

With a lack of supply, chip component prices are going up. A microcontroller unit chip from STMicroelectronics, for example, originally sold for $2 but is now priced at $14.

It's not clear if these chip issues will eventually have some kind of impact on Apple's business, but so far the Cupertino company appears to be able to manufacture devices as normal with no supply shortages.

Oof. Samsung is having a hard time there.

Nah they’ll probably just make up for it with Exynos chips
Score: 7 Votes (Like | Disagree)

Apple doesn’t use rubbish snapdragon processors for their phones, they only use Qualcomm modems.
Score: 5 Votes (Like | Disagree)

Not everyone can afford the latest and greatest phone.
Score: 5 Votes (Like | Disagree)

Yeah buy if those chips were in a Apple they would be the best, right?

Apple doesn’t use mediocre chips for their processors, only the A series beast will do. Been leading the industry for a very loooooonnnnnnngggggg time ?

They’ll be going 5 years backwards if they used that garbage. ????
Score: 5 Votes (Like | Disagree)

But it seems like the main shortages they’re having is with processors, which Apple doesn’t use
Score: 4 Votes (Like | Disagree)
Read All Comments