Google today announced a number of improvements that are coming to the Google Maps app in the near future, including a tool that makes it easier to highlight missing roads and transportation errors.


There's a new road editing tool available on the desktop, accessible by going to maps.google.com. Users can click on the side menu button and select the "Edit the map" option to get to the a "Missing Road" entry.

Choosing the Missing Road option lets users add missing roads by drawing lines, which is an upgrade from the prior tool that was pin based. Users could drop a pin where there was an error, but the new road drawing tool allows for better accuracy.

In addition to drawing lines to add missing roads, the tool lets users rename roads, change the direction of a road, and realign or delete incorrect roads. There are also tools for informing Google about road closures with specific dates, reasons, and routes.

Google is vetting all contributed road updates before publishing them to maps. The new editing feature is rolling out over the coming months to more than 80 countries.

Along with new road editing tools, Google is adding a photos update option to Google Maps. In the coming weeks, Google plans to add a tool that will let users "share experiences and highlights" with their recent photos. 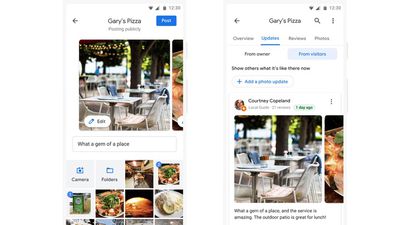 Photo updates can be added by going to the "Updates" tab when viewing a specific place in Google Maps and tapping the "upload a photo update" button. The tool will also display photos shared by others.

TheYayAreaLiving ?
Wonderful! Hopefully this does not happen again.

In addition to drawing lines to add missing roads, the tool lets users rename roads, change the direction of a road, and realign or delete incorrect roads.

For some reason... Google thinks my neighbor's driveway is a road.

This house has been here for over 30 years... but only recently Google has upgraded his driveway to a road. And it's annoying to see it every time I open Maps.

LeadingHeat
This is a pretty nice feature. I hope Apple implements something similar soon. Competition is great for consumers! (in most cases)

We have good progress with the traffic/construction/speed trap updates coming, so seems like we’re going in the right direction.

ThisBougieLife
As a lover of maps, I'm always glad to see more ways we can contribute to their improvement. I reported an error on Google Maps and they changed it fairly quickly. (They had labeled a local road "Cherry Ave." instead of "Cherry St." I hope someone got fired for that blunder). :p
Score: 3 Votes (Like | Disagree)

For some reason... Google thinks my neighbor's driveway is a road.

This house has been here for over 30 years... but only recently Google has upgraded his driveway to a road. And it's annoying to see it every time I open Maps.

He’s just flexing on everyone else with his big house. Probably edited the maps to make it look like that on purpose
Score: 2 Votes (Like | Disagree)

Well this could go awry.

"This new road is oddly shaped ... son, cover your eyes!"

Still a neat little feature that I hope has eyes for reviews. Nothing sucks more than driving around winding areas only to find the path Google Maps says is actually a closed-off off road area.
Score: 2 Votes (Like | Disagree)
Read All Comments

Monday October 11, 2021 7:20 am PDT by Hartley Charlton
Google is winding down its Material Design custom UI for iOS apps to switch to pure UIKit, according to Google's design chief for Apple platforms Jeff Verkoeyen. Google's suite of apps for iOS and iPadOS, including Gmail, Google Maps, Google Photos, Google Drive, and YouTube, have used custom user interfaces that mirror the experience on Android for almost a decade. The purpose of these...
Read Full Article • 108 comments

Tuesday December 14, 2021 11:49 am PST by Juli Clover
Adobe today updated its Photoshop for iPad app, introducing two tools that were previously unavailable to bring the iPad version of the app more in line with Photoshop for desktop. With the new Smudge tool, Photoshop for iPad users can blend colors in their images, and with the Sponge tool, different areas of an image can be saturated or desaturated. According to Adobe, the Smudge tool is ...
Read Full Article • 52 comments