The Australian Competition and Consumer Commission watchdog is eyeing a potential probe into pre-installed software and pre-defined "default" choices on mobile devices, including Google being set as the default search engine on Apple devices. 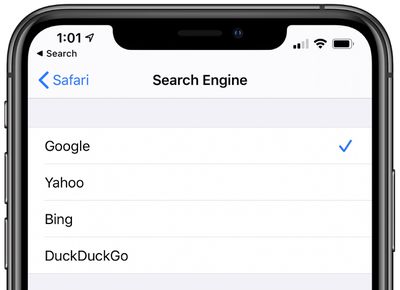 In a press release (via ZDNet), the agency is asking for consumer and industry feedback on the state of default settings, pre-installed web browsers, and how it impacts consumer choice, freedom, and competition. On Apple devices, Google is the default search engine in Apple's Safari browser, and while users can change it, there has been concern over how it hinders competition.

Earlier last year, the United States Department of Justice launched an antitrust lawsuit against Google, accusing it of anticompetitive behavior. As part of the case, it was revealed that Apple receives anywhere between $8 billion and $12 billion per year from Google in exchange to make it the default search engine for Safari. The lawsuit claims that the lucrative deal makes it significantly harder for competing search engines such as DuckDuckGo to grow and compete, given the massive advantage Google has.

ACCC Chair Rod Sims says that while users can change the search engine to other providers besides Google, the default option "increases the likelihood that consumers and businesses will stick with that option." Sims says that the agency wants to hear directly from consumers and businesses about how these default choices and pre-installed software impact how they use those services.

We would like to hear from consumers and businesses about the impact of the pre-installation of services and default settings on devices on their use of these services. We're also interested in how the design of user interfaces on devices, such as widgets, search bars, and the steps required for a consumer to change a default search service can affect how consumers use these services.

The agency has not formally launched an investigation into the situation. However, it is requesting feedback as part of an upcoming report "on the impact of default settings and pre-installation of search services and web browsers on consumer choice and competition."

ghostface147
So what’s the solution? Insert a choose your search engine screen in setup and list them in ABC order with none of them checked as a default?
Score: 12 Votes (Like | Disagree)

assb10yr
I wonder how much choice do Australians have when it comes to picking the taxes they wish to pay?
Score: 11 Votes (Like | Disagree)

DinkThifferent
Headline one year from now:

Australia Eyes Consumer Impact of Default Camera module on iPhone, citing unfair competition with Nikon and Canon.
ACCC Chair Rod Sims says that while users can change the Camera Module by disassembling their phone and attaching a wide angle lens made by Canon, the default option "increases the likelihood that consumers and businesses will stick with that option."

What else are you going to expect with Google? They don’t care about your privacy. There you go.

which of course is the paradox, in that supposedly Apple does care, but in return for about $10B a year from Google, it delivers Google as the default on all it's devices. I guess $10B is worth more to Apple than your privacy in reality, despite what they claim.
Score: 4 Votes (Like | Disagree)

I don't know the solution they're after. Someone has to be the default, what an annoying customer experience it would be to have one more thing to set during phone setup. It's not like Apple's defaulted it to their own search engine, like Google does on Android.

How often are you setting up a new phone that makes an additional 2 second choice of 4 search engines such an annoyance?
Score: 3 Votes (Like | Disagree)

[...]The lawsuit claims that the lucrative deal makes it significantly harder for competing search engines such as DuckDuckGo to grow and compete, given the massive advantage Google has.[...]

The lawsuit is ignoring the fact that google is the best search engine out there, and probably the most popular. And I'm guessing if people had to pick a search engine default it would be google anyway.

Waste of time and taxpayer money.
Score: 3 Votes (Like | Disagree)
Read All Comments

Friday March 25, 2022 4:46 am PDT by Tim Hardwick
European lawmakers have provisionally agreed upon a new law that would force Apple to allow user access to third-party app stores and permit the sideloading of apps on iPhones and iPads, among other sweeping changes designed to make the digital sector fairer and more competitive. The European Council and European Parliament said on Friday they had reached a political agreement on the...
Read Full Article • 576 comments

Wednesday October 20, 2021 12:50 am PDT by Sami Fathi
The increasingly popular privacy-focused browser Brave is officially saying goodbye to Google as its default search engine, replacing the world's most popular search engine in favor of "Brave Search," the company announced in a blog post. Brave Search is Brave's answer to customers wanting a "privacy-preserving" search engine, and it's built using Brave's own "independent index, and doesn't...
Read Full Article • 74 comments

Friday February 25, 2022 7:39 am PST by Hartley Charlton
Apple requires all apps that browse the web in iOS and iPadOS to use its own browser engine, WebKit, but amid accusations of anti-competitive conduct, should it continue to effectively ban rival browser engines? Big tech has been gripped by accusations of anti-competitive conduct in recent times, with Chief Executive of the UK's Competition and Markets Authority (CMA) Andrea Coscelli...
Read Full Article • 378 comments