Facebook is reportedly weighing up the legal implications of building facial recognition technology into a pair of smart glasses that the company is currently developing and which it intends to launch later this year. 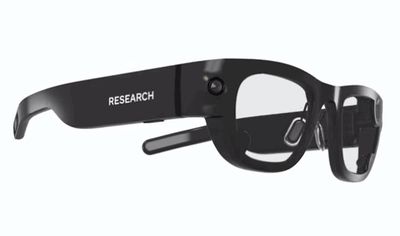 Prototype Project Aria AR glasses Facebook is using to research AR tech
According to BuzzFeed News, Facebook's chief of AR and VR, Andrew Bosworth, told employees during an internal meeting on Thursday that the company is currently evaluating whether or not a legal framework exists that would allow it to integrate facial recognition tech into the devices.


"Face recognition ... might be the thorniest issue, where the benefits are so clear, and the risks are so clear, and we don’t know where to balance those things," Bosworth said in response to an employee question about whether people would be able to "mark their faces as unsearchable" when smart glasses become a prevalent technology. The unnamed worker specifically highlighted fears about the potential for "real-world harm," including "stalkers."

According to the report, Bosworth was quick to emphasize that nothing had yet been decided and that it could well prove that current state laws would make it impossible for Facebook to offer people the ability to search for other people based on the real-world profile of their face.

Following the story's publication, Bosworth took to Twitter to underline the fact that Facebook had been "open" about its efforts to develop AR glasses, which he said are "still in the early stages."

"Face recognition is a hugely controversial topic and for good reason and I was speaking about was how we are going to have to have a very public discussion about the pros and cons," said Bosworth, adding in a follow-up tweet: "In our meeting today I specifically said the future product would be fine without it but there were some nice use cases if it could be done in a way the public and regulators were comfortable with."

Facebook first publicly spoke about its smart glasses project last year, when it claimed that the product would arrive "sooner rather than later" in 2021. The glasses are reportedly being developed in partnership with Ray-Ban, and are expected to go head to head with similar rival products from Snapchat and Amazon.

We’ve been open about our efforts to build AR glasses and are still in the early stages. Face recognition is a hugely controversial topic and for good reason and I was speaking about was how we are going to have to have a very public discussion about the pros and cons. (1/2) https://t.co/PFNSoBpcni — Boz (@boztank) February 25, 2021

Facebook has used facial recognition on its social network to identify people in pictures and power photo tag suggestions, but using the technology in an outward-facing, real-world capacity is a particularly sensitive issue. The controversy has been amplified by reports of government authorities and private businesses exploring the technology as a means of identifying and tracking civilians, combined with a lack of federal regulation surrounding its use.

Facial recognition has been implemented in Apple's Photos app and Apple has used it as a security feature for unlocking iPhones and iPads via biometric authentication. Apple is also working on smart glasses that will augment peoples' real-world perspective with digital features, although its product is still believed to be "several years away" from launch and there is currently no suggestion that Apple intends to use the technology in its rumored AR glasses. At any rate, given the company's privacy focus, any such application would be highly unlikely to resemble the kind that Facebook appears to be exploring.

For more information on Apple's rumored smart glasses, be sure to check out our dedicated guide.

ScottHammet
Facebook's only concern for the question of legality is whether or not they think they'll have a defensible position for their intended misuse of their capability. One thing we can all count on is that no matter what use they market these for, Facebook has its own clandestine intentions. Just ponder a database that tracks every person who's ever been within focal range of these glasses while you're wearing them? Think that won't end up on some government agencies subpoena list? And one wonders how many "customized" ads for, say, creepy personal hygiene products, my browser will suddenly serve up after being "detected" by someone wearing these who recently bought them.
Score: 31 Votes (Like | Disagree)

breather
Please, no face recognition. I do NOT trust Facebook on this (and many other things).
Score: 30 Votes (Like | Disagree)

CarpalMac
I will never hold a conversation with anyone wearing these or any other similar type of glasses. = FACT
Score: 21 Votes (Like | Disagree)

svanstrom
Apple doing an on-device solution matching against people in your adressbook I would accept; but Facebook… HELL NO!!

There's just no way that they can be trusted with some nice sounding legalease about how they aren't going to be evil this time.
Score: 17 Votes (Like | Disagree)
Read All Comments