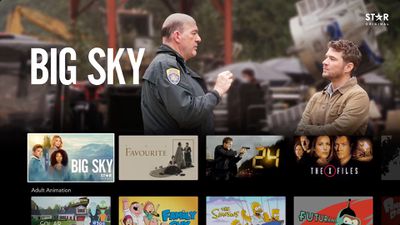 Star is the sixth brand to launch on Disney+, alongside Marvel, Pixar, Star Wars, National Geographic, and Disney. Star corrals titles from the back catalogs of Disney, ABC, and 20th Century Fox, as well as originals from Hulu that up until now weren't available outside the U.S.

Star in Europe features over 75 TV series and more than 280 movies, including four "Star Originals." To kick off the launch, Disney is highlighting series like "Modern Family," "Lost," "24," "Family Guy" and "Grey's Anatomy." Meanwhile, titles like "Deadpool 2," "Bachelor Party," "Commando," "Crimson Tide," "Con Air," and "The Grand Budapest Hotel" are amongst the movie offerings.

Movies including "Can You Ever Forgive Me," Danny Boyle's "The Beach," "Gone in 60 Seconds," and "Taken" will appear on the Star service in March, and every season of "The Golden Girls" is coming to Disney+ this summer. Disney is also set to bring more Marvel movies to subscribers in Europe within a year.

The first time users open Disney+ and select Star, they'll be asked if they want to manage parental controls. Different age ratings can be set for different profiles, with the ability to select content suitable for 6, 9, 12, 14, 16 and 18-year-olds. For an extra layer of security, each profile can also be PIN-protected, and a special kid-safe mode can be activated for the Under 7s.

The additional channel arrives alongside a price hike in Europe. In the U.K., the monthly subscription rate is set to increase from £5.99 to £7.99, or £59.99 to £79.90 per year, with an equivalent increase in the EU in euros. Current subscribers however will enjoy a pay freeze until August 23.

Oh my dude, the UK is still very much a part of the continent of Europe, Brexit or no! :)
Score: 16 Votes (Like | Disagree)

The UK is still part of Europe. It's just not part of the EU.

Europe is a geographical concept, by exiting the Union the UK just strikes it's own deals with both neighbouring countries and those further afield.
Score: 9 Votes (Like | Disagree)

:D Europe is a continent not a "feeling" you can just shake off but I noticed that my colleagues from the UK would always be like "you crazy European people" too and I would correct them to "MAINLAND European people please"
Score: 8 Votes (Like | Disagree)

Mercifull
A pleasant surprise to wake up this morning and see every episode of Futurama at my fingertips. Bravo Disney :D
Score: 7 Votes (Like | Disagree)

farqueue
My brain: Disney+ launches Adult streaming service. Lmao i only want to read what i want to read
Score: 7 Votes (Like | Disagree)

asiga
Just curious: if they are “adult-friendly”, what do they consider as “adult-unfriendly” content? (to be honest, I feel like most of the content produced in the last 15 years is adult-unfriendly)
Score: 5 Votes (Like | Disagree)
Read All Comments

Saturday February 4, 2023 10:05 am PST by Eric Slivka
Online retailer TigerDirect has slashed pricing on the M1 iPad Air in several colors, offering the base 64GB configuration for just $313.99 in Purple and Pink. Note: MacRumors is an affiliate partner with TigerDirect. When you click a link and make a purchase, we may receive a small payment, which helps us keep the site running. That's a savings of 48% compared to Apple's normal $599.00...
Read Full Article • 353 comments

Sunday February 5, 2023 6:07 am PST by Joe Rossignol
Apple has discussed selling a new top-of-the-line iPhone alongside the Pro and Pro Max models in 2024 at the earliest, according to Bloomberg's Mark Gurman. Based on this timeframe, the device would be part of the iPhone 16 lineup or later. In a September 2022 edition of his weekly "Power On" newsletter, Gurman said there was "potential" for an iPhone 15 Ultra to replace the iPhone 15 Pro...
Read Full Article • 305 comments