IDC: Chromebooks Outsold Macs for the First Time in 2020

New data shows that Chromebook laptops outsold Mac computers for the first time over the course of a full year in 2020, a year largely driven by commercial demand for lightweight, powerful, and affordable personal computers. The data from IDC (via GeekWire) shows that Windows continues to dominate the market, although its share declined over the course of the year as Chrome OS surged past macOS into second place.

For the full year, the market share of Windows was down 4.9% in 2020 compared to 2019, while the Mac grew from 6.7% to 7.5%. IDC's data includes collective information about desktops, laptops, and workstations, and doesn't provide a breakdown of specific different product types. It is worth noting, however, that Chrome OS includes products made by Acer, Asus, Dell, HP, and Lenovo. 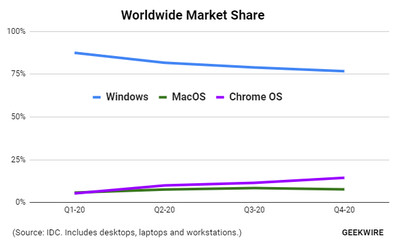 Demand for personal computers skyrocketed during 2020, largely thanks to the shift to working and learning at home. Market data estimates that in Q4 of 2020, the Mac grew by around 30% compared to the same quarter the previous year. In comparison to other makers, Apple had the most significant year-over-year growth in the quarter.

In addition to market shifts due to changes in work and school patterns, the fourth quarter of 2020 notably also saw Apple launched its first Apple silicon Macs, which have been very well received.

levitynyc
Chromebooks will work fine for about 98% of people who buy a laptop. Factor in most Chromebooks cost less than half the entry level Macbook, this makes total sense.
Score: 23 Votes (Like | Disagree)

Hastings101
Probably school districts + parents of remote learners pushing the sales up, which is awesome imo. Chromebooks are the perfect education machines for almost every scenario besides a couple that macOS/Windows are required for. Cheap, have a microphone + speakers + webcam, easy to remote manage, very reliable too.
Score: 13 Votes (Like | Disagree)

sammazookie
"lightweight, powerful, and affordable" - sorry, but you can only pick two.
Score: 11 Votes (Like | Disagree)

Wednesday June 16, 2021 7:11 am PDT by Hartley Charlton
With no sign of redesigned MacBook Pro models at this year's WWDC, when can customers expect the much-anticipated new models to launch? A number of reports, including investor notes from Morgan Stanley and Wedbush analysts, claimed that new MacBook Pro models would be coming during this year's WWDC. This did not happen, much to the disappointment of MacBook Pro fans, who have been...
Read Full Article • 187 comments

Wednesday June 16, 2021 10:49 am PDT by Juli Clover
Apple CEO Tim Cook this morning participated in a virtual interview at the VivaTech conference, which is described as Europe's biggest startup and tech event. Cook was interviewed by Guillaume Lacroix, CEO and founder of Brut, a media company that creates short-form video content. Much of the discussion centered on privacy, as it often does in interviews that Cook participates in. He...
Read Full Article • 265 comments