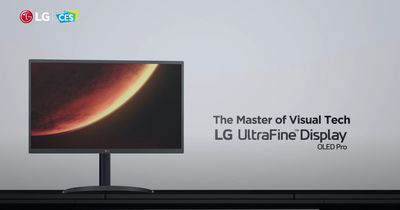 The newest addition to LG's popular series of high-end UltraFine monitors features an OLED display that covers 99 percent of the DCI-P3 color space and 99 percent of the Adobe RGB color space. The display offers Pixel Dimming HDR technology that is made possible by OLED and is targeted at professionals such as video editors or photographers.

Very few OLED monitors have come to market in recent years, with the majority of models coming from Dell. The UltraFine OLED Pro is the first OLED monitor offering from LG.

The monitor appears to be positioned as a direct rival to Dell's newly-announced UltraSharp 40 Curved WUHD, which shares the same panel and similar specifications.

The monitor espouses a Thunderbolt 4 connection, but there are also connectivity options for DisplayPort, HDMI, and USB, but there is little other information available about the product at this time.

Full specifications, availability, and pricing information for the UltraFine Display OLED Pro and UltraWide 5K monitor have not yet been announced.

tevion5
Why are monitor manufacturers so allergic to 200+ PPI? Make a pretty panel with high pixel density and high end Apple users will buy it. You could charge a lot for this. Is Apple sending hired goons around LG and Dell to stop them doing this or something? A baffling gap in the market for a few years now.

There's essentially nothing like a 6K 32" display available that isn't the crazy expensive Apple XDR. Make a regular one for $2000, it would sell like crazy. I'd buy it!

The LG displays Apple sells which are basically the great iMac panels in an LG shell look hideous in my opinion. Not sure why something like this can't exist in an Apple Cinema Display form factor.
Score: 28 Votes (Like | Disagree)

joecomo
I have the feeling since I got my LG 5K Thunderbolt Display in 2016 - not a lot has happened. No visible progress on the market. The 32 inch is just 4K and the 5K2K has even less pixels than the 5K UltraFine display from 2016.

A thunderbolt 6K 32 inch display (OLED or not) for a reasonable price - that would be progress.
Score: 21 Votes (Like | Disagree)

Hellsurfer
“UltraFine”, “OLED”, “Pro”.
That’s 3 words that add a Grand each to the retail price of the display.?
Score: 10 Votes (Like | Disagree)

The previous Ultrafines used the same panel as the iMacs. Could this indicate that the upcoming iMacs could be OLED too?


If you want a 200+ppi retina display for desktop, choice is virtually zero. Very happy with my Ultrafine 5k though. Still it's a problem, because everything sub 200ppi now looks like 1990s.
Score: 7 Votes (Like | Disagree)
Read All Comments