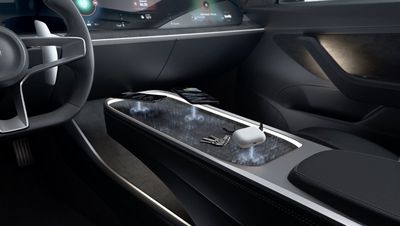 Unlike traditional wireless charging mats, which require devices to be precisely aligned in order to charge, FreePower allows for full surface charging from corner to corner. The proprietary technology can accommodate different surface sizes and any number of Qi-enabled devices, including the latest iPhones and AirPods with a wireless charging case. One exception is the Apple Watch, which does not work with standard Qi chargers.

Aira envisions a vehicle with a large wireless charging surface spanning the center console, on which Qi-enabled devices could be placed to charge, with total freedom of movement. The exact implementation would likely be up to automakers, as some might want to incorporate cupholders and other features alongside the charging surface.

In September, accessory maker Nomad released the Base Station Pro wireless charging mat as the first product with FreePower integration. Priced at $199.95, the Base Station Pro has 18 charging coils that allow for three Qi-enabled devices to be charged at once, regardless of their position on the mat. This solution is similar to what Apple aimed to achieve with its canceled AirPower mat, although it lacks support for the Apple Watch.

No timeframe was offered for when we might see the first vehicles with support for FreePower. Aira also wants to expand the technology to furniture like desks and nightstands, as well as restaurants, airports, hotels, and more.

Braderunner
"...with total freedom of movement". That's the problem.
Score: 15 Votes (Like | Disagree)

swm
freedom of movement: as in "stuff moves around freely on every sudden velocity change or sharp turns."
Score: 11 Votes (Like | Disagree)

tobefirst
That is a remarkably bad photoshop job.
Score: 10 Votes (Like | Disagree)

mtrm
That sounds like a recipe for disaster in case of an accident or emergency braking....
Score: 7 Votes (Like | Disagree)

NMBob
I've got a half-eaten Big Mac on the dash of my pickup that hasn't moved for months.
I suspect the surface will rubberized so things won't just slide around.
Score: 7 Votes (Like | Disagree)
Read All Comments

Monday January 11, 2021 6:00 am PST by Juli Clover
Satechi today announced the launch of the Dock5 Multi-Device Charging Station that works with iPhones, iPads, AirPods, and other smartphones and tablets. The dock is able to charge up to five devices at one time through two 20W USB-C ports, two 12W USB-A ports, and a Qi-based wireless charger that can charge at up to 10W. With the exception of the Qi-based wireless charging spot, charging is ...
Read Full Article • 25 comments

Tuesday January 5, 2021 8:27 am PST by Hartley Charlton
Apple is researching the integration of multiple inductive charging coils into MacBooks and iPads to use them as wireless chargers for other devices, according to a patent filed by Apple. The patent, spotted by Patently Apple, is titled "Inductive charging between electronic devices" and was awarded by the U.S. Patent and Trademark Office. Apple has been researching device-to-device...
Read Full Article • 105 comments

Sunday December 5, 2021 7:55 am PST by Hartley Charlton
Apple is working on five new Macs for launch in 2022, including a new version of the entry-level MacBook Pro, according to Bloomberg's Mark Gurman. In the latest edition of his "Power On" newsletter, Gurman said that he expects Apple to launch five new Macs in 2022, including: A high-end iMac with Apple silicon to sit above the 24-inch iMac in the lineup A significant MacBook Air...
Read Full Article • 102 comments

Thursday December 2, 2021 7:36 am PST by Joe Rossignol
Apple's chipmaking partner TSMC has kicked off pilot production of chips built on its 3nm process, known as N3, according to Taiwanese supply chain publication DigiTimes. The report, citing unnamed industry sources, claims that TSMC will move the process to volume production by the fourth quarter of 2022 and start shipping 3nm chips to customers like Apple and Intel in the first quarter of...
Read Full Article • 187 comments