Mozilla has released Firefox 83 on Mac, bringing new features and improvements, including a new HTTPS-Only Mode, pinch to zoom, and more. 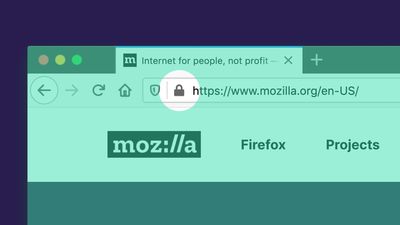 A new pinch zooming feature also comes to Firefox on Mac. Users can now pinch to zoom using a trackpad to zoom in and out of webpages.

Elsewhere, Picture-in-Picture now supports keyboard shortcuts for fast forwarding and rewinding videos. The arrow keys can now be used to move forward and back 15 seconds, along with volume controls. For a list of supported commands see Support Mozilla.

Mozilla has also improved functionality and design for a number of Firefox search features, and improved page load performance by up to 15%, page responsiveness by up to 12%, and reduced memory usage by up to 8%.

Part of the JavaScript engine that helps to compile and display websites has also been replaced, improving security and maintainability of the engine at the same time.

Firefox 83 is available to download from the Mozilla website and works on Apple Silicon CPUs via emulation under Apple's Rosetta 2 that ships with macOS Big Sur. Mozilla says it is working toward Firefox being natively-compiled for these CPUs in a future release.

But on a touchscreen-less Mac? What's the point?

But on a touchscreen-less Mac? What's the point?

If you use a MacBook or have a Magic Trackpad pinch-to-zoom is nice and natural. You don't need a touchscreen.
Score: 9 Votes (Like | Disagree)

Risco
I was a beta tester for Firefox from 0.6, but once I moved to Mac in about 2013 I realised they only cared about Windows ago and stopped using. Having pinch and zoom might just bring me back!

Konigi
They didn't update the icon yet. What a disappointment!

For the rest, indeed nice features. Firefox remains the most stable, secure, and fast browser, in my experience. Extremely satisfied.
Score: 5 Votes (Like | Disagree)

Good to know that Firefox is still alive. I've been using Chrome for like ages.

In my experience, Chrome is crap. I never used it much on Mac (Safari is generally better), and on Windows I use Firefox.

Chrome wastes a lot of time sending god knows what to Google's servers. Besides the security implications, it just slows the entire browser down as it won't display a page until it hits fonts.google.com or whatever other stupid Google service it wants to hit for no reason.
Score: 5 Votes (Like | Disagree)

velocityg4
I'm not really sure what took so long. I didn't even realize you couldn't do pinch to zoom before. Although you could apparently enable it in about:config. Just goes to show how often I zoom in or out on web pages.
Score: 4 Votes (Like | Disagree)
Read All Comments

Tuesday June 1, 2021 10:11 am PDT by Joe Rossignol
Mozilla today announced the public release of Firefox 89 for macOS with a redesigned and modernized core browsing experience. The latest version of the browser features a simplified toolbar with less frequently used items removed, allowing the focus to be on the most important navigation items. Menus and prompts have also been streamlined across Firefox to have cleaner designs and clearer...
Read Full Article • 135 comments