Apple today updated Final Cut Pro and Logic Pro, its video and audio editing apps designed for professionals, to version 10.5 and 10.6, respectively. The new software updates introduce improved performance and efficiency on Mac computers with Apple Silicon, along with new features that take advantage of the ‌Apple Silicon‌ Neural Engine. 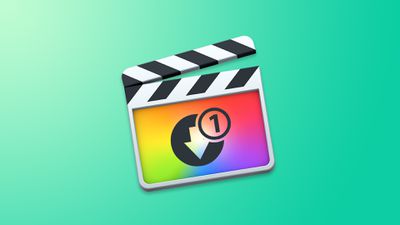 Apple's release notes for the Final Cut Pro X update are below:

MainStage, Compressor, Motion, and Logic Remote have also all been updated to go along with the main Final Cut Pro and Logic Pro updates. All of the software can be downloaded from the Mac App Store.

cupcakes2000
Still no idea why they sank aperture.
Score: 10 Votes (Like | Disagree)

Is FCPX lagging behind competitors like Resolve and Premiere? I know FCPX faced a lot of criticism as it was launched... is it still like this?

Not at all, I would say overall it surpassed Premiere. In FCXP I can do nearly 95% of Premiere but in way more efficient way (performance and usability) and it isn't as hardware hungry as Adobe products. It's not an amateur tool anymore, a lot of pros use it since it's a good package. However Davinci still remains the king regarding color grading. But what does professional even mean.... would a hollywood production company work with FCXP? Absolutely not. But there is a broad variety of productions who work with it nowadays. And the guy doing a one day shoot for 3k or the video agency doing a commercial for 50k are professionals.... since they get paid for it.

In filmmaking it's not about the tools but rather what you are able to do with it, simple as that. If you suck at storytelling no editing tool will help you with it. Some might know the youtuber Daniel Schiffer (if not, you missed out big), amazing stuff he does. You wouldn't call him bad only because of using FCXP :D

FCXP and silicon will be a banger combination, excited for the future.
Score: 10 Votes (Like | Disagree)

Is FCPX lagging behind competitors like Resolve and Premiere? I know FCPX faced a lot of criticism as it was launched... is it still like this?

As an Adobe Premiere user,

There may be some features missing and bugs but Premiere Pro still isn't optimized for the Mac (or Mac Pro even) and FCPX is just WAY FASTER. There are advantages to Adobe and Davinci and FCPX and Avid and etc. so it's still up to the end user, but when it comes to speed on a Mac system it's hard to argue against FCPX.

Is FCPX lagging behind competitors like Resolve and Premie? I know FCPX faced a lot of criticisms as it was launched... is it still like this?

Depends how you measure it I guess. Certainly not lagging premiere in core editing, as premiere is ******* (no offense premiere users). Resolve has big update frequently though. Biggest things people seem to want for Fcp are better audio tools and collaboration tools.
Score: 6 Votes (Like | Disagree)

harmoniumfarfisa
FCPX bums me out. It's really just made for short web content videos at this point.
People will defend the hell of the organization tools but I was shocked it's just Spotlight. Spotlight isn't reliable.
Keywords instead of bins is bonkers.
If you're making a film about MLK, and have 500 photos of MLK, then keywords are worthless.
No easy manual save function to preserve different versions is a problem too.
And basic tasks like quitting the App can take 20 minutes saving a ballooning Library.

FCPX is like one healthy update away from being something special but they're playing.
Score: 3 Votes (Like | Disagree)

Thursday January 13, 2022 1:01 am PST by Sami Fathi
Following limited testing of native support, Dropbox's Mac app built for Apple silicon is now available to all beta testers. Earlier this month, Dropbox began testing native Apple silicon support with a handful of beta testers, promising to expand testing to all beta users before the end of the month. Now, all Dropbox users who have enabled "Early releases" in their account preferences will...
Read Full Article • 57 comments

Thursday October 28, 2021 6:41 am PDT by Hartley Charlton
Update 9:45 a.m.: In a reply on Twitter, Dropbox founder and CEO Drew Houston apologized for the confusion sparked by the "not ideal" support responses and said that Dropbox is "certainly supporting Apple silicon" with a native Apple silicon build planned for release in the first half of next year. Original article below. We're certainly supporting Apple Silicon, sorry for the confusion. We've ...
Read Full Article • 313 comments