Netflix today announced a price increase, which will make the standard and premium plans more expensive, while pricing on the entry-level plan remains the same. 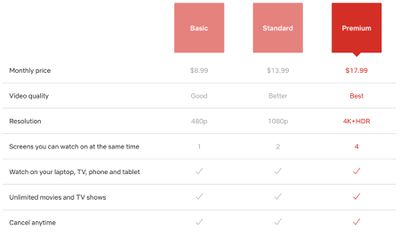 The standard plan lets people watch in 1080p quality and includes streaming on two screens, but those who want to watch 4K Netflix content or watch on up to four screens at a time need to subscribe to the most expensive premium plan.

The changes will take effect immediately for new customers who sign up to Netflix, and current customers will see the updated prices on their bills over the course of the next two months, according to CNBC. Customers will get a 30 day warning prior to the price hike.

During the last Netflix earnings call, Netflix COO Greg Peters said that if Netflix is delivering more value for users, then there is "an opportunity to occasionally go back" and ask members "to pay a little bit more."

randolorian
Be careful, Netflix. You have a lot of strong competition right now.
Score: 51 Votes (Like | Disagree)

fbr$
"The basic plan that limits quality to standard definition continues to be $8.99 a month"

Why does this thing still exist?
Score: 49 Votes (Like | Disagree)

And is it my imagination, or is Netflix original content totally B-movie schlock? Netflix is the new grindhouse!
Score: 31 Votes (Like | Disagree)

dannyyankou
1080p should be their base plan, lol
Score: 31 Votes (Like | Disagree)
Read All Comments

Thursday May 13, 2021 10:32 pm PDT by Sami Fathi
A new rumor suggests that Apple will announce the third-generation AirPods and the recently rumored HiFi, or high-fidelity Apple Music tier, on Tuesday, May 18, via a press release on its website. The new rumor comes from Apple YouTuber Luke Miani who shared the alleged exclusive news with the AppleTrack website. According to the YouTuber, Apple plans to release the next-generation AirPods...
Read Full Article • 213 comments

Netflix Says It's Not Testing Spatial Audio Support for AirPods

Monday February 22, 2021 10:55 am PST by Sami Fathi
Netflix says it's not currently testing spatial audio support for the AirPods Pro and AirPods Max, putting to rest an earlier report that claimed support would roll out in the spring. Image via iPhoneSoft In a statement to MacRumors, a Netflix spokesperson says that it's not currently testing spatial audio support, and has no plans to make public at this point in time. Netflix instead says...
Read Full Article • 90 comments