Sony Music Entertainment, Universal Music, and a division of Warner have filed applications for a preliminary injunction against Apple for hosting three music apps in the Russian App Store that infringe copyright, reports TorrentFreak. 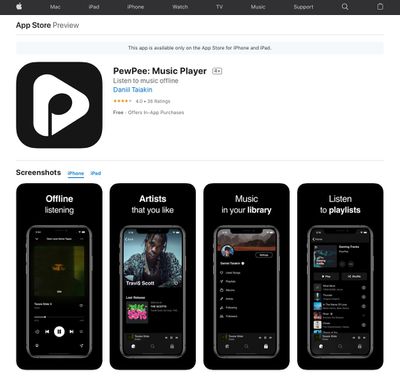 Roman Lukyanov, CEO of Semenov & Pevzner, a local law firm specializing in copyright protection and representing the labels, told Kommersant that the applications for interim measures against three apps were filed on October 1, 2020, listing Apple as the defendant.

The applications were filed at the Moscow City Court and request that local telecoms watchdog Roscomnadzor takes action "to stop creating conditions" that allow for the illegal distribution of copyrighted works by a handful of local artists.

One of the apps in question, PewPee: Music Player, offers users a Spotify-like experience where they sign up for a free account to access a catalog of music, listen to playlists and download tracks for offline listening. It's unclear where PewPee sources its music. According to TorrentFreak's source code checks, however, the app actually distributes MP3 files of the selected tracks.

The PewPee website offers the same free service using basic browser tools, but in a way that reveals the precise URLs of the songs, which can also be downloaded.

The complaints follow a new law that came into force in Russia last week and which is designed to quickly remove piracy-enabling apps from mobile app stores. The legislation requires digital distribution platforms to quickly respond to allegations of copyright infringement. Failing to do so could result in app stores being blocked by local internet service providers.

The record labels' complaints were filed in Moscow on the day the new law came into force, and the cases are reportedly being considered a "test run" by the music industry, with other copyright holders said to be watching how they are processed by the courts.

itsmilo
Why not? They are always proud to claim that they check every app. In a way Apple approved copyright infringement
Score: 16 Votes (Like | Disagree)

Victor Mortimer
Thanks, grabbed all three before Apple pulled anything!
Score: 13 Votes (Like | Disagree)

Why not? They are always proud to claim that they check every app. In a way Apple approved copyright infringement

They will have a T&C that basically ensures they don't carry the liability for an app's functionality is illegal. The whole check if app abides to law is all on best effort, or worse, political/commercial interest basis.
Score: 11 Votes (Like | Disagree)

They will have a T&C that basically ensures they don't carry the liability for an app's functionality is illegal. The whole check if app abides to law is all on best effort, or worse, political/commercial interest basis.

T&C aren't the law, that are just stuff someone came up with which may or may not respect the law.
Score: 7 Votes (Like | Disagree)
Read All Comments