A transaction labeling error with the Apple Card has been causing confusion for some ‌Apple Card‌ owners, with AT&T charges listed as "Waters, Hardy & Co" instead of AT&T on ‌Apple Card‌ statements. 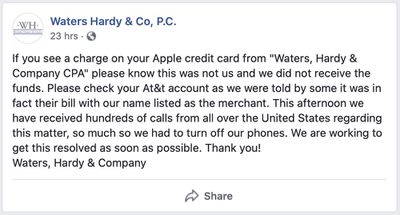 The problem appears to have started at some point yesterday, with tax preparation service Waters, Hardy & Co receiving hundreds of phone calls from confused customers. In a Facebook post, the company said that it had received so many calls from ‌Apple Card‌ owners that its phones had to be turned off.

MacRumors reader Kyle alerted us to the problem. He found an incorrect merchant charge for "Waters, Hardy & Co" listed in the Wallet app, which was actually his bill from AT&T. He contacted the company and received a voice recording with a message that said Apple had incorrectly listed Waters, Hardy & Co as the merchant for the AT&T charges.

MacRumors reader Kyle says that he contacted Apple Support about the problem and was told that the issue was known and was in the process of being corrected. Waters, Hardy & Co. also says that it is working to get the problem resolved as quickly as possible.

Update: According to Apple, the issue has been fixed and AT&T transactions will no longer be mislabeled.

I’ve had this charge this morning. Frankly, you need to be a little thick in order not to do 2+2 .... it’s the same exact amount as your AT&T bill... on the same day as your AT&T bill... your AT&T bill has not been charged separately.... Apple Card frequently mislabels charges.... what genius could solve the mystery? But, no of course, some people immediately call the police/the internets/macrumors for help!!

Having worked customer service at a credit card company.. do not underestimate how thick the average person is.
Score: 29 Votes (Like | Disagree)

CWallace
Since Goldman Sachs administers the Apple Card, it may be premature to presume that it is Apple behind this merchant mix-up.
Score: 23 Votes (Like | Disagree)

Waters Hardy and whatever need to stop being so lazy and answer their phones.

Never gonna hire them for anything!

I understand your frustration. Unfortunately, we had to turn off our phones due to the massive amount of phone calls we were receiving due to this error. As of now, all ATT has allowed us to do is file an "incident report" that we are told will eventually be acted upon. We are sorry that we were not able to answer your phone call but hopefully, the issue will be resolved soon.

ChromeAce
Waters & Co is the secret subsidiary of AT&T run by the NSA.
Score: 12 Votes (Like | Disagree)

va1984
I’ve had this charge this morning. Frankly, you need to be a little thick in order not to do 2+2 .... it’s the same exact amount as your AT&T bill... on the same day as your AT&T bill... your AT&T bill has not been charged separately.... Apple Card frequently mislabels charges.... what genius could solve the mystery? But, no of course, some people immediately call the police/the internets/macrumors for help!!
Score: 11 Votes (Like | Disagree)
Read All Comments