Back in March, we noted that optical Thunderbolt 3 cables were starting to become available some four years after the standard's debut. Availability of these high-end optical cables has taken another step forward recently, as Corning has begun shipping out its cables in lengths ranging from 5 meters to 50 meters. 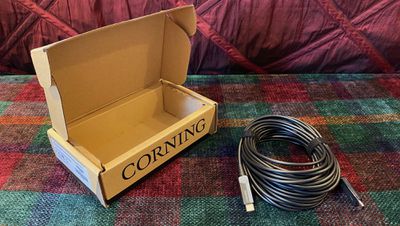 Corning's 10-meter optical Thunderbolt 3 cable
Compared to passive and active copper Thunderbolt 3 cables that support relatively short lengths most appropriate for a desktop setting, optical cables allow for much longer cable lengths needed by certain professional and corporate users. But for anyone who wants to be able to put their computer and/or accessories like external storage some distance away from their workspace, such as for heat, noise, or aesthetic reasons, these cables are certainly an option.

While optical Thunderbolt 3 cables allow for long cable runs, they do have some limitations compared to traditional copper cables, with one of the most significant being a lack of power capabilities. That means small accessories like external SSDs that need to draw bus power from the host devices they're attached to won't work with optical cables.

They can, however, be used with Thunderbolt 3 docks that can in turn support a variety of other types of connections such as USB, displays, audio, and more, as the Thunderbolt controller in the dock handles converting everything to run over Thunderbolt. Daisy-chaining of multiple Thunderbolt 3 accessories is also supported with optical cables.

Connectors on optical Thunderbolt 3 cables are a little on the bulky side given the components needed to convert the electrical Thunderbolt 3 signal to an optical one and back. They are, however, only a bit larger than typical passive copper cable connectors and similar in size to active copper cable ones, so they shouldn't block adjacent ports. With only the fiber optic strands inside, the cable itself is also significantly thinner than most traditional USB and Thunderbolt cables.

B&H is currently quoting special order status with availability in 7-14 business days for all but the 50-meter version, which is listed as in stock. Corning says significantly improved supplies will be available in just a couple of weeks.

AngerDanger
Finally, thanks to Corning's Gorilla Glass, you can drop thunderbolt cables whenever you want without worrying about them shattering.
Score: 9 Votes (Like | Disagree)

Gabebear
You would need a VERY specific use case for these with USB4 40Gbps around the corner. USB4 is loosely based on Thunderbolt3(same tech, but different specs).
Score: 5 Votes (Like | Disagree)

citysnaps
Nice! People with requirements who really need them will gladly pay the price. Those who don't will have a good moan.
Score: 4 Votes (Like | Disagree)

MRisberg
I've been waiting years for these to come to market. It's so nice they're finally here!
Need to find out it's latency now.
Score: 3 Votes (Like | Disagree)

underattack
40 GBit USB4 cables will be limited to 80cm. Sure, you will probably find longer once, but it will be questionable if they will work.

The price of these cables is "ok" considering the technology and the cost of getting it all packaged up. A cheap 40 GBit SPF transceiver runs about $50. You got 2 in this cable, plus the fiber (relatively cheap) and the cost of assembling it all. Probably costs $150 or so to make these cables? Add the small market for them, and the price is appropriate.
Score: 3 Votes (Like | Disagree)

Internet Enzyme
Really useful idea, actually. People will guffaw at the price—I did—but you know what it’s novel and genuinely a lifesaver to have for the captive pros who need it, so they’re able to price them to hell. I hope that this becomes more standard, because one of the worst aspects of thunderbolt is how its nearly impossible to actually connect anything at a normal USB-type distance. What use is an external device when it has to tethered within three feet of its host?
Score: 3 Votes (Like | Disagree)
Read All Comments