Craig Federighi Explains How Scribble Feature in iPadOS 14 Was Developed

Scribble is one of the most notable new features in iPadOS 14, and in a new interview with Popular Mechanics, Apple SVP of software engineering Craig Federighi has revealed more details about how it was developed and how it works on iPad. 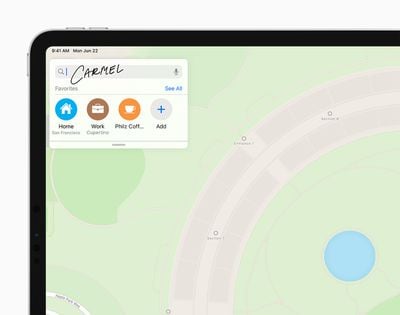 With Scribble in iPadOS 14, you can use an ‌Apple Pencil‌ to write in any text field, and the written text is then converted to typed text. The feature means you can use the ‌‌Apple Pencil‌‌ without having to swap over to a keyboard when you need to compose an email, write a Calendar event, visit a URL, send an iMessage, or conduct a search.

Federighi explained to Popular Mechanics how Scribble's early development relied on extensive data gathering involving analyzing how people from all over the world write things down.

"When it comes to understanding [handwriting] strokes, we do data-gathering. We find people all over the world, and have them write things," says Craig Federighi, senior vice president of software engineering at Apple. "We give them a Pencil, and we have them write fast, we have them write slow, write at a tilt. All of this variation."

That methodology is distinct from the comparatively simple approach of scanning and analyzing existing handwriting. Federighi says that for Apple's tech, static examples weren't enough. They needed to see the strokes that formed each letter. "If you understand the strokes and how the strokes went down, that can be used to disambiguate what was being written."

The job of integrating stroke-based recognition with character and word prediction is all done on-device, something that machine learning and raw processing power makes possible, explained Apple's software chief.

"It's gotta be happening in real time, right now, on the device that you're holding," Federighi says. "Which means that the computational power of the device has to be such that it can do that level of processing locally."

Subscribe to the MacRumors YouTube channel for more videos.
Thanks to Scribble and iPadOS 14, an ‌iPad‌‌ can be used almost entirely with touch and tools, and there's little need to type. If you're someone who prefers writing by hand, ‌Scribble‌ introduces tools that only enhance the experience. Check out the hands-on video above to see Scribble in action.
Tags: Apple Pencil Guide, Scribble
Related Forums: iOS 14, iPad Accessories
[ 72 comments ]

Everyday, thousands of MacBook screens are touched and people are bewildered that nothing happens. Touchscreens have been standard for over a decade now - it’s bizarre that there are computers costing thousands of dollars that don’t have touchscreens.

The fact that it’d be used so little didn’t stop Apple from including the touchbar - why on earth haven’t they made their products “Just Work” by including a touchscreen yet?

Seriously - have any kid who hasn’t used a Mac before use a MacBook for a few hours. I guarantee they’ll touch the screen at least once and consider it broken when nothing happens. Literally every phone, tablet, and non-Apple-or-budget laptop has a touchscreen - it’s just a given that a MacBook should, too.

I have read and reread your rationale as to why Macs ought to have touchscreens and it seems like your argument boils down to "just because".

And honestly speaking, I haven't exactly seen touchscreen PCs take the world by storm either. Yes, they are there, and I suppose having a feature you hardly use is better than not having it, but it feels like this is there purely to tick off a checkbox, not so much because it legitimately improves the end user experience.
Score: 13 Votes (Like | Disagree)

inb4 people say "steve jobs rolling in his grave" and bringing up the stylus quote...

The stylus quote was clearly a shorthand of "who wants to rely on a stylus exclusively to interact with the UI, when you already have ten fingers?". Using a stylus to write handwritten text or draw something is quite different from that.
Score: 11 Votes (Like | Disagree)

bob122989
Newton technology all the way. I’ve been surprised they haven’t had it on iPhone and iPad since day one.
Score: 11 Votes (Like | Disagree)

Harvey Zoltan
I would not be surprised if it's Apple Pencil support and not touch support that comes to the AS Macs.
Score: 7 Votes (Like | Disagree)

You may well be right but many tech commentators seem to be convinced that touch screen Macs are coming. Hopefully not too much longer before we know for sure.

Everyday, thousands of MacBook screens are touched and people are bewildered that nothing happens. Touchscreens have been standard for over a decade now - it’s bizarre that there are computers costing thousands of dollars that don’t have touchscreens.

The fact that it’d be used so little didn’t stop Apple from including the touchbar - why on earth haven’t they made their products “Just Work” by including a touchscreen yet?

Seriously - have any kid who hasn’t used a Mac before use a MacBook for a few hours. I guarantee they’ll touch the screen at least once and consider it broken when nothing happens. Literally every phone, tablet, and non-Apple-or-budget laptop has a touchscreen - it’s just a given that a MacBook should, too.
Score: 6 Votes (Like | Disagree)

ouimetnick
It’s amazing how much more there is to this than just meets the eye. I generally don’t think about on device processing and learning. I’ve been using Scribble since iPadOS 14 came out and it’s really useful for converting notes into text.
Score: 6 Votes (Like | Disagree)
Read All Comments