Netflix's Limited Free Access Works on Mac and iPad, but Not iPhone 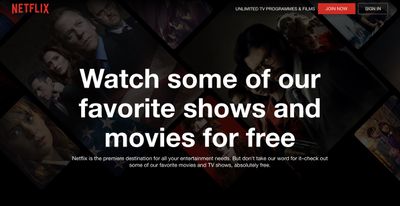 The limited free access includes admission to "Stranger Things," "Murder Mystery," "Élite," "Boss Baby: Back in Business," "Bird Box," "When They See Us," "Love Is Blind," "The Two Popes," "Our Planet," and "Grace and Frankie."

The feature allows users to watch a movie or the first episode of a series for free, after which they will be prompted to subscribe for continued access. One 30-second skippable ad for Netflix is played before every title. The feature is available worldwide, no account or sign-up is needed, and the available content will reportedly change on a regular basis.

A Netflix help page spotted by Gadgets360 reveals that only browsers on computers, tablets, and Android devices are supported. iOS devices are unable to use the limited free access.

The help page does not explain why iOS blocked from access. Given that the free access is available on macOS and iPadOS in-browser, it is unclear why Netflix has excluded iOS.

Amid an increasingly competitive video streaming market, free access to selected Netflix programming hopes to attract more subscribers to the platform. Last week it was reported that Apple is planning to extend the free trial of Apple TV+ in an effort to lure in more subscribers.

Krizoitz
To all the people making the snarky comments about in app purchase and the App Store, note that this feature is available on THE iPAD. It’s got nothing to do with either of those things.
Score: 9 Votes (Like | Disagree)

WiiDSmoker
Netflix has every right to dictate which platform can watch their free content.
Score: 8 Votes (Like | Disagree)

Jakewilk
I guess the costs of a walled garden are starting to show. Who needs the fastest processor when you can stream AAA games to your android with xbox game pass? And why not go android when it comes with free netflix? More evidence suggesting that apple doesn’t have a monopoly or monopoly level control, but also stronger indication that industry is getting fed up with apple’s strict rules
Score: 7 Votes (Like | Disagree)

macsrcool1234
no doubt there's some 'rule' somewhere in the ios store preventing this
Score: 5 Votes (Like | Disagree)

Unami
Duh, it‘s pretty obvious why they don‘t do it on iOS - nothing „unclear“ about it. There’s no in-app subscription to netflix on iOS, because they don’t want to pay the 15-30% to apple (which makes absolutely sense, it‘s quite a steep cut if applied every month - especially when compared to a „pay once“ app that get‘s the same service from apple for a fraction of the price). so that free promo with the „buy now“-link won‘t work in the app store.
Score: 5 Votes (Like | Disagree)

ViDeOmAnCiNi
Is iOS excluded because they cannot link to external site for the subscription cost? I'm sure NF does not want to take that 15-30% hit from Apple app store...
Score: 4 Votes (Like | Disagree)
Read All Comments