Another class-action complaint has been lodged against Apple, which claims that the company was aware of a MacBook Pro design flaw that caused some devices to have backlight display issues (via Apple Insider). 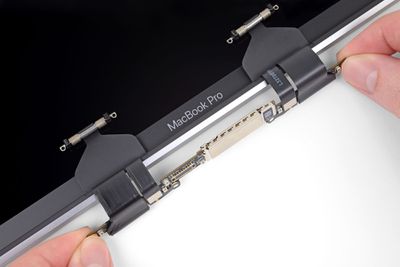 The so-called "flexgate" problem was present in some MacBook Pro models manufactured between 2016 and 2017. The problem appears as dark patches along the bottom of the MacBook Pro's display. Some users reported that opening their MacBook Pro beyond a certain angle turns off the screen entirely. iFixit discovered that this was because the delicate flex cable which connects to the bottom of the display could wear out and break over time.

The issue has been the subject of multiple lawsuits against Apple, with the last one being filed in May. Since the issue often takes time to manifest, the affected ‌MacBook Pro‌ units can be outside of Apple's one-year warranty period when they start exhibiting symptoms, resulting in an out-of-warranty repair fee of up to $850.

Apple seemingly fixed the issue by extending the length of the flex cable by 2mm in the 2018 MacBook Pro. It also launched a free repair program in May 2019, but the program only applies to 13-inch MacBook Pro models released in 2016.

The first class action lawsuit sought restitution for all costs attributable to repairing or replacing the affected MacBook Pro units, and called for Apple to expand its repair program to cover the 15-inch MacBook Pro. The proposed class was defined as all persons within the United States who purchased a 2016 or newer MacBook Pro.

"Apple was aware of the issues with the backlight screen and the defective flex cable, in light of the comments posted by consumers on Apple's discussion forum and that those comments were deleted after they were posted," the new lawsuit reads.

The second class-action complaint argues for violation of competition, false advertising, and consumer fraud laws. Apple is also accused of violation of the Song-Beverly Consumer Warranty Act, the Magnuson-Moss Warranty Act, and breach of express and implied warranty, in addition to fraudulent concealment and unjust enrichment.

Plaintiffs are seeking a range of relief measures, damages, and court fees. They also hope a judgment will compel Apple to identify and declare all defective MacBook Pros. As there are now two cases against Apple due to "flexgate," both of which are filed with the Northern District of California, it is likely that the cases will eventually be consolidated into one.

More lawsuits for Apple! When is it going to stop?

When they take responsibility for their products. Those class action lawsuits are nothing new and usually the only thing that pushes Apple into repair programs.
Score: 29 Votes (Like | Disagree)

JoelTheSuperior
I think the biggest issue is just how high the out of warranty repair fees are. If the repair was say, $50-100 then I genuinely don't think many people would be too miffed about it, but $850 is outrageous.

The cynical part of me has to suspect that Apple deliberately pushes their out of warranty repair fees sky-high to encourage people to simply buy a new device rather than repairing theirs. I have found when going to the genius bar before that I've been encouraged to consider just buying a new device instead of repairing the one I have.
Score: 25 Votes (Like | Disagree)

It is not just money grabbing. Look at Zone of Tech (long) video about this issue, he payed over 3000 dollars for his machine and was denied repair many times. Only months later he was given a replacement after posting a video on YouTube, within the box he found comments like "issued for advertising/PR purposes", so the technical request was never really properly addressed, he got his replacement because he was a Youtuber and it was bad publicity.
Score: 24 Votes (Like | Disagree)

ouimetnick
In other news, a poor design results in high failure rates. Why Apple has to change things just for thinness when no one asked for it is beyond me. The butterfly keyboard failure and this flex ribbon cable issue.
Score: 20 Votes (Like | Disagree)

No, Apple totally deserves to get sued for flexgate.

I have 2016 15-inch MacBook Pro affected by this design flaw. The computer was babied and used mostly as a desktop. And just randomly out of the blue, patches of dark spots along the bottom of the screen that I have to shell out $850 to get repaired.
Score: 12 Votes (Like | Disagree)
Read All Comments