Apple today released tvOS 13.4.6, a minor update to the tvOS operating system that runs on the fourth and fifth-generation Apple TV models. tvOS 13.4.6 comes a little over a week after the release of tvOS 13.4.5. 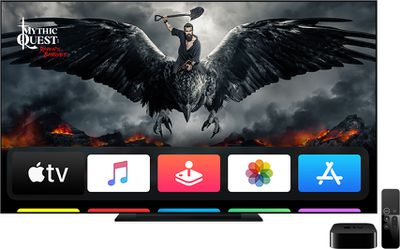 tvOS 13.4.6, a free update, can be downloaded over the air through the Settings app on the ‌Apple TV‌ by going to System > Software Update. ‌Apple TV‌ owners who have automatic software updates enabled will be upgraded to tvOS 13.4.6 automatically.

tvOS updates are almost always minor in scale, focusing on under-the-hood bug fixes and small feature tweaks rather than major outward-facing changes, and based on the other updates released today, tvOS 13.4.6 includes security fixes and is recommended for all fourth and fifth-generation ‌Apple TV‌ owners.

I wonder when the new ATV is going to come out. I have the HD and I have a feeling they will soon discontinue upgrading for the A8 chip.

Some rumors floating around that a new Apple TV with the A12X could drop anytime. That said I also think the ATV 4/HD will probably still get tvOS upgrades for at least a couple years yet, as:
-they are still selling it new in the Apple Store and it still has plenty of power as a streaming device at 1080p
-software support for the HomePod (which is also A8 based) is now based on tvOS and I don't see them dropping software support for the HomePod anytime soon
Score: 3 Votes (Like | Disagree)

I haven’t experienced that. Maybe you could chronicle your issues for those of us who are quite happy with the updates

Starting with tvOS 13, AirPods connect, but have no ability to change volume once a video starts (doesn’t matter if it’s Amazon Prime, PBS, Computer…). Still doesn’t work, so found only 100% effective solution, which is to connect the AirPods through Bluetooth settings with case held open until I start video and use volume control on ATV controller before closing it.

At some point, the images of movies in Unwatched in Computers (which, for some dumb reason, is still a long horizontal list instead of 4-across), started cropping the images as you scroll, increasingly cropping until you reach the point where all you can see of a movie cover is the top row of one pixel.

The words, Continue Watching, disappeared from Unwatched list on movies you already started.

Last update, the words, Continue Watch, reappears, but it’s on the right side of the screen while the image of the movie remains on the left. (Really, Apple?)

Starting Computer app, you’ll more often than not get [Server], Can’t Connect, Retry?, [Server], Retry?, Movies|TV|blah blah, all in rapid succession with no input on your part.

There’s other issues, but these really annoy me because they actually used to work perfectly fine! Even on the ATV2 & 3! It seems like thy’ve gotten someone who is a) the-worst-programmer-in-the-world or b) intentionally screwing things up for some reason.

AND THEY ARE ALL STILL BROKEN!
Score: 3 Votes (Like | Disagree)

Joniz
Boy, the Apple TV updates just keep getting worse on my ATV4.

Wonder what amusing flub this one’s going to come up with.
Score: 2 Votes (Like | Disagree)

The 4th-gen Apple TV was renamed to Apple TV HD when updated to include the white-ringed Siri Remote. Apple lists the Apple TV 4K as a new product line, not a 5th-gen of the old line.

When/if a new Apple TV gets released, it would be the sixth generation Apple TV.

Not a perfect example, but think of name of one's children versus the order that they were born.
Score: 1 Votes (Like | Disagree)

jasonefmonk
There is currently no 5th-gen Apple TV hardware. The 4th-gen Apple TV was renamed to Apple TV HD when updated to include the white-ringed Siri Remote. Apple lists the Apple TV 4K as a new product line, not a 5th-gen of the old line. This is similar to what happened with the iPad/iPad Air product lines.

Boy, the Apple TV updates just keep getting worse on my ATV4.

Wonder what amusing flub this one’s going to come up with.

I haven’t experienced that. Maybe you could chronicle your issues for those of us who are quite happy with the updates
Score: 1 Votes (Like | Disagree)
Read All Comments